Keeneland amped up the atmosphere in the Sales Pavilion to kick off the September Sale to create excitement and showcase the best of what the Bluegrass has to offer.

“The sale should be a fun environment,” Keeneland President and CEO Shannon Arvin said. “It is exciting that we are here, that we are all back together and that we have these phenomenal horses on offer in Book 1. We had complimentary cocktails being passed and brunch being served, a Bluegrass band playing ‘My Old Kentucky Home’ on the auction stage right before the sale started. We worked hard to create that environment, and we got a lot of positive feedback. Book 1 at Keeneland’s September Sale is special, and it deserves to feel that way.”

“Trade was really strong today,” Keeneland Vice President of Sales Tony Lacy said. “There was confidence, and the money was spread out over more horses. The energy on the grounds was very strong. I have not seen the Sales Pavilion this full in a long time.”

Betz Thoroughbreds, agent, consigned Monday’s top-priced yearling, who also is a half-sister to Grade 1 winner Echo Town and Grade 3 winner J Boys Echo. They are out of Grade 2 winner Letgomyecho, by Menifee.

Alan Quartucci of Northshore purchased the filly for owner Joe Allen and said she most likely will go to trainer Shug McGaughey.

“She looks like a real runner,” Quartucci said. “She has a fantastic pedigree that’s still going forward every day. The filly who won in Saratoga (Echo Zulu) was amazing. (The yearling) was the whole package.”

Consigned by Mt. Brilliant Farm, a colt by Into Mischief from the family of North American champion and English and Irish highweight Islington (IRE) sold to Ron Winchell’s Winchell Thoroughbreds for $1.35 million. He will be trained by Steve Asmussen.

“He has always been outstanding,” said Mt. Brilliant owner Greg Goodman, who purchased the colt’s dam, the Hard Spun mare Superioritycomplex (IRE), as a 3-year-old in England. “He’s always done everything right. A calm horse, smart; we’re really happy with him and we’re really happy Mr. Winchell got him and that he’s going to a good home.”

A filly by Uncle Mo out of the winning Forestry mare Nikki’s Choice sold for $1.1 million to Don Adam’s Courtlandt Farm.

“She’s an April foal, but you can see that she’s still a little high behind and see she’s gonna develop still,” Courtlandt’s Ernie Retamoza said. “A real athletic, type-y filly, young mare, fits our program to a T. Not sure where we’ll send her, but we’ll get her home and break her. She acts like she’s gonna be the right type of filly that we’re looking for. Had to stretch, obviously, to get her, but Mr. Adam looked at her this morning and loved her – we all loved her – and we felt like she was a filly worth stretching for.”

“She was a beauty,” Pat Costello of Paramount said. “She didn’t put a foot wrong from the day she was here, and we could see with the way the vetting was going, everybody was on her. She deserved to bring the kind of money she brought because she’s just stunning. She came from a client of ours and she was always nice, very much so. We were delighted with the price. It was a little bit more than we thought she would bring.”

During the session, Courtlandt acquired five yearlings for $2.6 million to lead buyers. 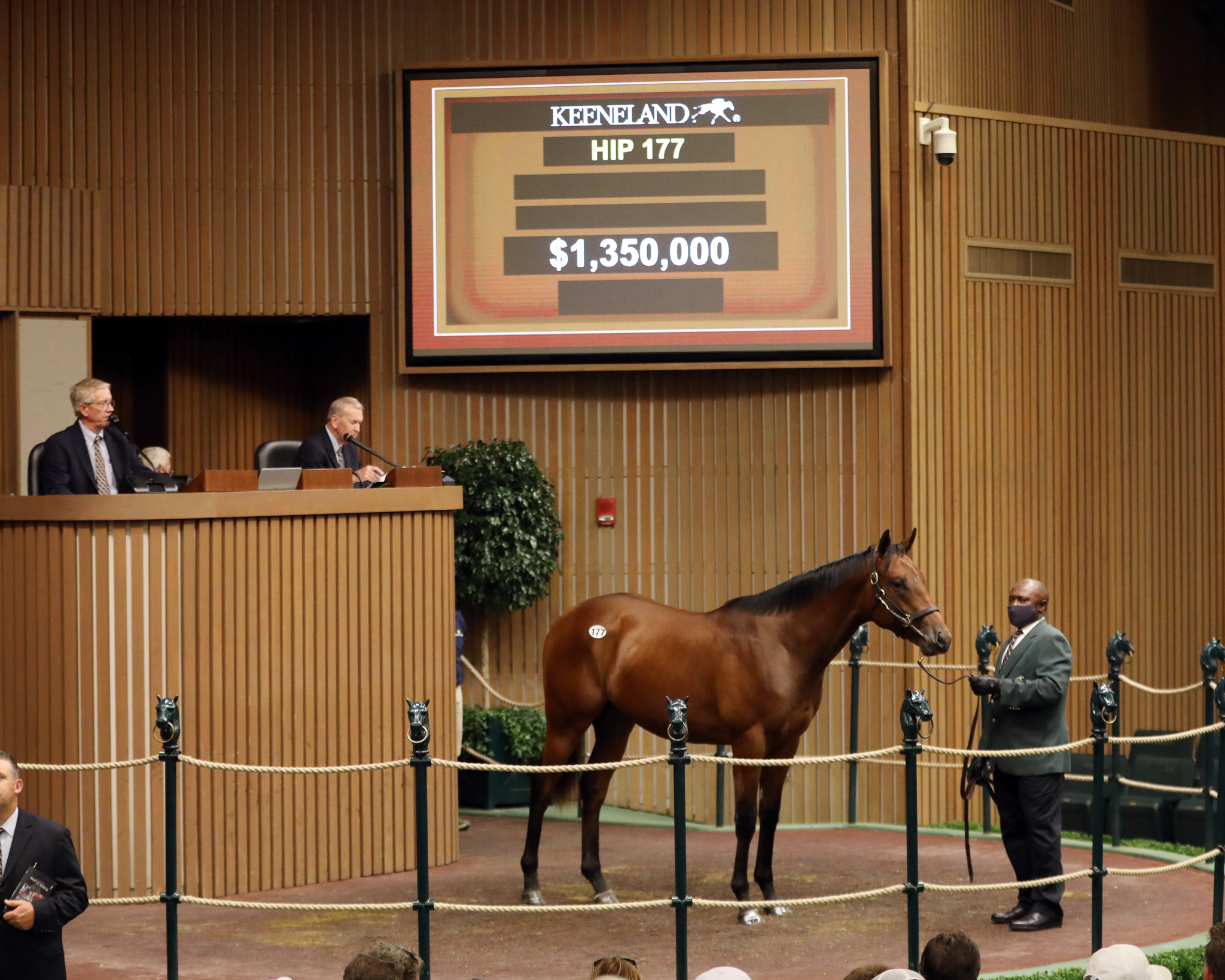 M.V. Magnier paid the amount for a colt by Quality Road whose dam is a half-sister to champion Rushing Fall. Taylor Made Sales Agency, agent for WinStar Bred & Raised, consigned the colt, who is out of stakes winner Milam, by Street Sense.

“He is a lovely colt and he has done well his whole life,” Elliott Walden, WinStar’s President, CEO and Racing Manager, said. “We are very proud of him and that Coolmore got him and wish him nothing but the best.”

Walden said he is confident in the market at this point of the yearling sales season.

“There are six race tracks with maiden races for over $100,000,” he said. “When I trained 15 years ago, we were running for $30,000. It is amazing. Purses have caught up and gives a person a chance to make money on the race track. I think that will translate all the way through. I don’t know about you, but I have never seen so many people on Day 1 in there sitting down (in the Sales Pavilion).”

Taylor Made Sales Agency sold 14 yearlings for $5,782,000 to lead consignors during the session.

Donato Lanni, agent, spent $950,000 for a Medaglia d’Oro filly consigned by Claiborne Farm, agent. She is the first foal of the Distorted Humor mare Naples Princess, a full sister to stakes winner Banker’s Buy, and from the family of champion Mitole and 2021 Grade 2 winner and Belmont (G1) runner-up Hot Rod Charlie.

“She wasn’t a hard one to find – she had everything,” Lanni said. “He’s (Medaglia d’Oro) just a proven sire over and over. He’s got good fillies, colts. (She has a) great female family. She’s an athlete, she’s classy and she’s got pedigree. I hate to say it: She just checked all the boxes.”

Lanni said the market has “really been strong all year. There’s a big appetite for really good horses out there and it’s nice to see us get back to some kind of normalcy.”

A colt from the first crop of Triple Crown winner Justify who is a half-brother to multiple Grade 2 winner Pretty N Cool sold for $950,000 to Hideyuki Mori of Japan. Consigned by Baccari Bloodstock, agent, he is out of the Rockport Harbor mare Stayclassysandiego and from the family of Grade 1 winner Sean Avery.

Seven horses who did not meet their reserves during Monday’s session have been entered in the RNA Reoffer, a new program at this year’s September Sale that will begin immediately following the final hip of Tuesday’s second session. They are:

“The RNA Reoffer is a mechanism for free trade,” Lacy said. “It has been well received. We have some people who feel that the market didn’t treat them the way they expected. This program allows them to come back (with the horse) and maybe have a better reception tomorrow. This gives people a safeguard.”

To participate in the RNA Reoffer, sellers were required to inform the Sales office in writing no later than 30 minutes following the sale of the final hip of today’s session.

A reserve must be placed and approved on reoffered horses, and must be within 15 percent above or below the initial hammer price. (Click here for information about the RNA Reoffer.)

The second session of the September Sale starts tomorrow at 1 p.m. ET. TVG2 will have live coverage of the session from 1-7:30 p.m. The entire sale is streamed live at Keeneland.com.