Click here for a replay of the race and interviews with jockey Brian Hernandez Jr. and trainer Tom Drury Jr.

Click here for a replay of the post-race Zoom interviews with owner-breeder Bruce Lunsford and with Drury.

Bruce Lunsford’s homebred Art Collector roared past the filly Swiss Skydiver at the eighth pole and drew off to a 3½-length victory Saturday afternoon in the 96th running of the $600,000 Toyota Blue Grass (G2) for 3-year-olds.

Trained by Tom Drury Jr. and ridden by Brian Hernandez Jr., Art Collector picked up 100 qualifying points toward the $3 million Kentucky Derby Presented by Woodford Reserve (G1) to be run Sept. 5 at Churchill Downs. With Saturday’s victory, Art Collector has 100 points, good for fourth place on the leaderboard. The Kentucky Derby is limited to the top 20 point earners that pass the entry box.

The victory was the first in the Toyota Blue Grass for Hernandez and the first graded stakes win for Drury.

Swiss Skydiver, who is the runaway leader in points for the Kentucky Oaks (G1), picked up 40 points in her first race against males. That total matches Toyota Blue Grass third-place finisher Rushie, who is not Triple Crown nominated. Enforceable picked up 10 points for finishing fourth to boost his total to 43, good for 12th place. 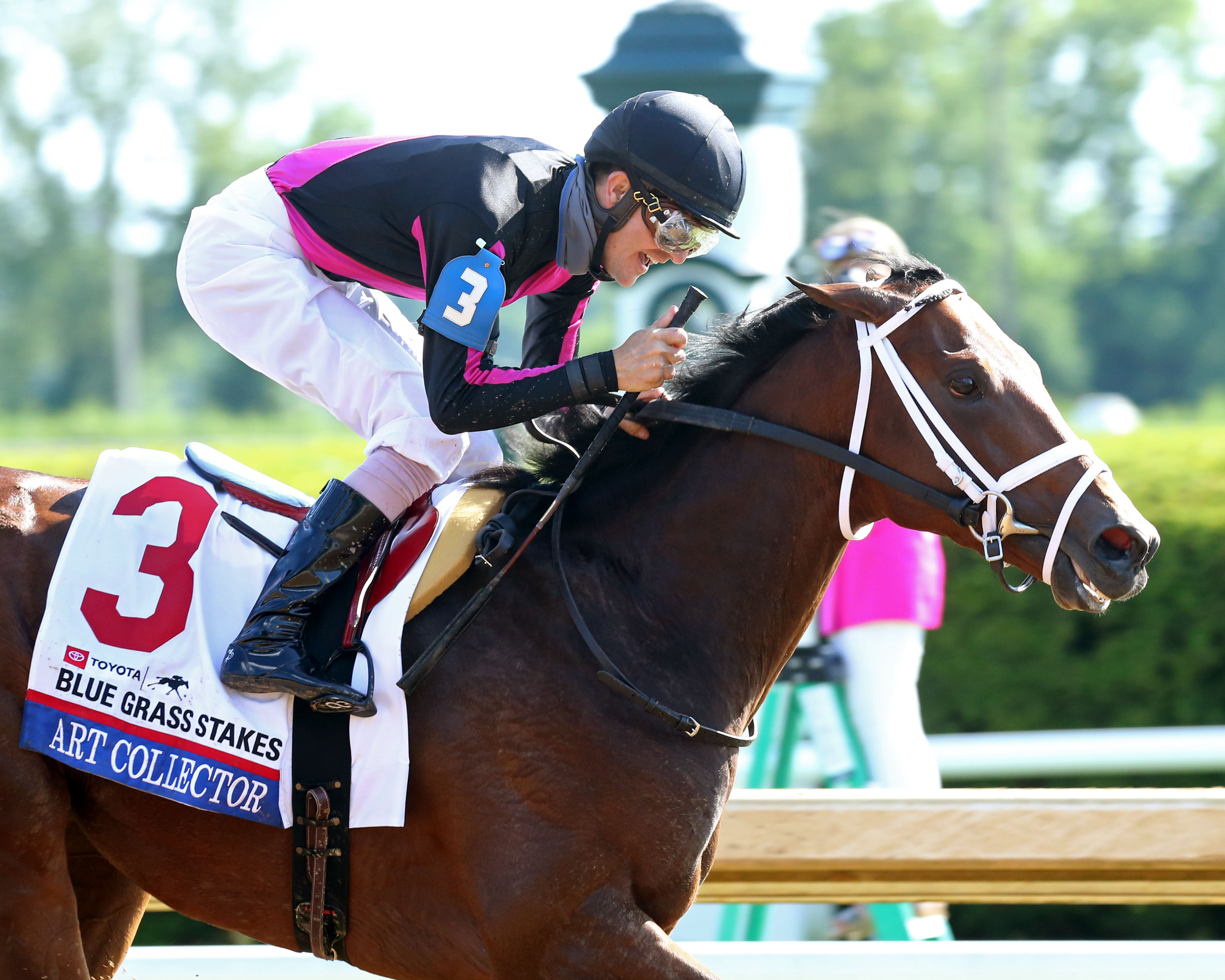 The two leaders quickly opened daylight on the rest of the field, dueled on even terms through the top of the stretch before Art Collector drew clear. Art Collector covered the 1 1/8 miles on a fast main track in 1:48.11.

The victory was worth $360,000 and increased Art Collector’s earnings to $548,475 with a record of 8-4-1-0. Art Collector is a Kentucky-bred son of Bernardini out of the Distorted Humor mare Distorted Legacy.

It was another neck back to Enforceable, who was followed in order by Attachment Rate, Mr. Big News, Finnick the Fierce, Tiesto, Hard Lighting, Basin, Shivaree, Hunt the Front and Man in the Can.

Brian Hernandez Jr.: “We had picked (to ride) Art Collector after his allowance race (in November 2019 at Churchill Downs). Kenny (McPeek, trainer of Swiss Skydiver) wasn’t sure if he was going to try the Blue Grass or the Ashland. And I was committed to Art Collector for the Blue Grass. We had a lot of confidence in Art Collector but it just goes to show you what a tough decision it is.”

What stood out to you about his performance today? “He’s a really good horse. If you go back and watch all his replays, he’s just a very athletic horse. I think one of the most impressive races he ran was the day at Churchill he got shuffled around and almost fell down. I almost pulled him up, but he ran again. From that day on, we always believed he was a really good horse. It’s been a fun ride.”

Any hesitation about him getting the 1¼-mile distance of the Kentucky Derby? “No. You see him today going a mile and an eighth. They’re all 3-year-olds, and we’re all going to be trying to go a mile and a quarter. We’ve got one of the Derby favorites now, so you’ve got to be excited.”

Tom Drury on his journey with Art Collector: “It’s been a little bit of a roller coaster ride. Everybody was fighting the same thing with COVID-19 and the uncertainty. I’m at a loss for words. It takes a village to get these things; there’s a lot of people who have done their part. I’m just honored to be able to share this with my staff and everyone that worked to get him here.”

Have you thought much about the Kentucky Derby? “It took me my whole life just to get to this one win. I’m going to enjoy this one and we’ll worry about that tomorrow.”

Kenny McPeek on runner-up and beaten favorite Swiss Skydiver: “She ran super. Art Collector was the horse I was worried about. He is obviously really good and really talented right now. I thought if she was going to get beat, it would be by him. I am happy for Tom Drury. He works hard, and he has been at it a long time.

“It was a great race. Her fractions were pretty taxing, but she is fast. She is so special. We might lean against going to the Derby. We might go to the Alabama (G1) and consider waiting for the Kentucky Oaks (G1).”

Michael McCarthy, trainer of third-place finisher Rushie: “Rushie ran very well. He got a little hung out wide in the first turn, and on the backside (I) heard (announcer) Kurt Becker say he was in the middle of the race track. He put in a nice run around the turn and seemed to be even through the lane, never really switching leads or anything like that. Any time you can go back to Keeneland and run third in (the Toyota Blue Grass) you can’t really be too upset with that.”

What’s next?: “I don’t know. We’re going to let him catch his breath and get his legs underneath him the next couple of days before we decide. We’ll let the dust settle and see what we want to do.”

Mark Casse, trainer of fourth-place finisher Enforceable: “He ran well. I don’t think there is any secret out there that there has been a pretty good speed bias and we had to run against it. We ended up fairly wide turning for home and it probably cost us third. But I just wanted a positive race and him finishing. I talked to Mr. (owner John C.) Oxley beforehand and told him we don’t have to win, we just want a good race.

“Now what we want is for him to come out of this race and do well and we’ll figure out one more. I was proud of him today. He broke well, and that’s something we worked hard on because he hadn’t been breaking very well. It was a real positive race.”