Desire for premium Thoroughbred racing prospects from the world’s leading horsemen continued to fuel heady trade during Tuesday’s second session of the Keeneland September Yearling Sale, which realized strong gains and the sale of 13 seven-figure horses led by a colt by Constitution for $1.8 million.

“Today was a lot of fun,” Keeneland President and CEO Shannon Arvin said. “With 22 horses bringing a million dollars or more, we’re back to the pre-pandemic sale levels of 2018 and 2019, when the sales were really strong. It’s exciting to be back.

“We appreciate the sellers, breeders and buyers who worked with us on the sale format,” Arvin continued. “They believed in us as we tried to put together the best Book 1 we possibly could. We heard from a lot of buyers who said their short lists were long because there were so many nice horses. That was great to hear. And the results speak for themselves.”

“The demand for quality horses is beyond expectations,” Keeneland Vice President of Sales Tony Lacy said. “Coming out of Day 1, the momentum was euphoric. Coming into Day 2, we were wondering ‘can we maintain this?’ In racing terms, we hit the wire hard. We finished those last few hours today with a euphoric feeling. It was great to see diversity in the buyers of the 13 horses that brought a million or more. From large to small breeders, everyone was getting a piece of the action. A lot of people are extremely happy.”

Tuesday marked the second day of the two-day Book 1.

“None of this (the Book 1 format) was done in a vacuum,” Lacy said. “We listened to a lot of feedback from buyers. We heard there was a lack of consistency. There was a nervousness of where is the best spot in the market. It was evident over the last couple of years that if you put the right horses in front of the right people the market takes care of itself. There were a lot of horses we encouraged to move forward that were part of the million-dollar-plus sales that possibly would have ended up in Book 2 normally. When you plug in good physicals and good pedigrees with the right people who afford their time to come to the sale, the results can pay dividends. We really appreciate everybody putting their support in us.

“I think the momentum is only building for the rest of the sale,” Lacy continued. “We’re moving into another section of the market, and I anticipate it will be every bit as strong. Obviously the average and median might adjust, but there are a lot of good horses coming down the pike. I expect it to be very solid again.”

On Tuesday, Dana Bernhard purchased the $1.8 million colt by Constitution, who is out of Grade 1 winner Last Full Measure, by Empire Maker, and is a three-quarter brother to Grade 1 winner Valiance. The colt was consigned by Taylor Made Sales Agency, agent. 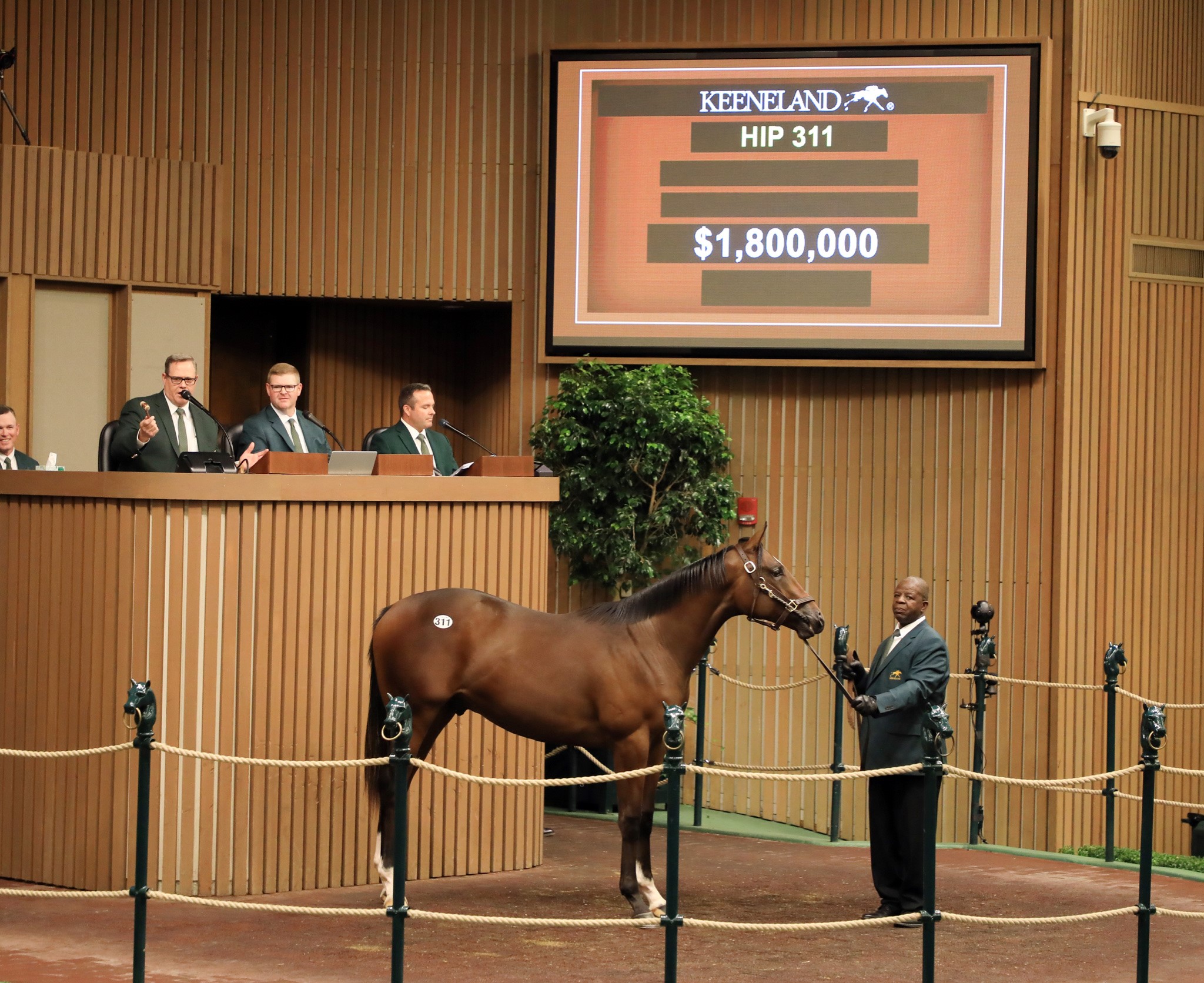 “He’s one of the best colts we’ve seen in this crop,” Taylor Made CEO Mark Taylor said. “He’s beautifully bred.  The blood is there. He looks like a Derby horse: a lot of presence, a big walk, a lot of substance. Very strong. We’re just fortunate to have him. Congratulations to China Horse Club; they bred a beautiful horse. I think Constitution is on his way to the top. (The yearling) is a great representation of the stallion. He brought a bunch of money, which he deserved to.”

Taylor Made was the session’s leading consignor, selling nine horses for $5.41 million.

Courtlandt Farm spent $1.35 million for a filly by Into Mischief who is a half-sister to Grade 1 winner Nickname. Consigned by Upson Downs Farm, agent, she is out of the winning stakes-placed Borrego mare Nina Fever and from the family of Grade 3 winner Good Potential.

Alex Rankin of Upson Downs said the filly, who was bred by Michael Hui, is the first seven-figure yearling for his operation in 35 years of consigning.

“She’s been class from the time she was born,” Rankin said. “We’re over the moon. I’m still trying to process it.”

On behalf of an undisclosed client, Richard Knight Bloodstock, agent, led buyers by spending $4.15 million for five horses. They included three of the session’s highest-priced yearlings: a colt by Constitution, who is a half-brother to Grade 1 winner Kimari, for $1.3 million; a Gun Runner filly, who is a full sister to recent Prioress (G2) winner Wicked Halo, for $1.1 million and a filly by Justify from the family of champion Halfbridled for $1.05 million.

“Most of the time, when we go into these sales, we follow a long list and we’ve got a limited budget, and maybe one horse falls into our hands,” Knight said. “(Today) we’ve been able to highlight the nice horses, and it’s been great to be competitive for them. That’s what we all want to do.”

The $1.3 million colt is out of Grade 3 winner Cozze Up Lady, by Cozzene.

“He was absolutely my pick coming in here,” Knight said. “I loved him from the moment I saw him. I thought he was everything we came here to look for. We came to look for a really smart horse (who will) hopefully be a two-turn horse. He has pedigree (and) is by a great stallion. Gorgeous-looking horse. Every single time he came out (to show at the barn), he did it for me. Delighted to get him.”

The colt was consigned by Highgate Sales, agent, which is selling horses at the September Sale for the first time.

“From Day 1, this horse had been one of the top physicals and had the pedigree to match,” Highgate’s Jacob West said. “We knew he was pretty damn popular. He was bred by China Horse Club and raised at WinStar, and they did an incredible job getting him ready. It was easy for us to lead him up here and let these guys battle. Constitution is doing very well. He (Hip 192) has a big strong shoulder and big strong hip. People are thinking two-turn classics when they look at horses like him. That was (West’s partner in Highgate) Jill Gordon’s first million-dollar horse, and a lot of credit has to go to her in putting this consignment together.”

Also selling for $1.3 million was Keeper of the Key, a daughter of Quality Road, purchased by Larry Best’s OXO Equine. Lane’s End, agent, consigned the filly, whose dam is the stakes-winning Galileo (IRE) mare Key To My Heart (IRE). She is from the family of Grade 1 winner A Z Warrior, Grade 2 winner Jojo Warrior, Grade 3 winner E Z Warrior and stakes winner J Z Warrior.

“Quality Road speaks for itself,” Best said. “It’s a great (catalog) page. You sense from yesterday the value of the Quality Road bloodline. This particular filly just was beautiful with a great pedigree. If you look at the history of the pedigree, it’s very rich. At this price point, it was worth the bet. About 10 minutes ago, I pegged it at this price. I feel lucky. “

Five horses sold for $1.1 million each

Richard Knight Bloodstock, agent, paid the amount for the aforementioned daughter of Gun Runner who is a full sister to recent Prioress (G2) winner Wicked Halo.

“Lovely physical, very racy,” Knight said. “She has a great temperament and she will be a lovely broodmare. We are very happy to have her. She is going to stay over here (in America) and will go to Graham Motion.”

Gainesway, agent, consigned the filly, who is out of Grade 2 winner Just Wicked, by Tapit.

“She brought about what we thought she would bring,” Gainesway General Manager Brian Graves said. “She is very smooth. She’s got the X factor. She walks nice; she’s balanced and athletic. All the top judges found her. It helps that she’s by Gun Runner. The market is strong – we thought it would be strong – but it is very selective.”

Repole/St. Elias Stables/West Point Thoroughbreds paid $1.1 million for a colt by City of Light who is a half-brother to Grade 3 winner Wit and stakes winner Barkley. Out of the Medaglia d’Oro mare Numero d’Oro, he was consigned by Rosilyn Polan.

Bringing $1.1 million was a colt by Quality Road, who is a half-brother to Grade 1 winner Guarana, purchased by Whisper Hill Farm and Three Chimneys. Hill ‘n’ Dale Sales Agency, agent, consigned the colt, who also is a half-brother to stakes winners Magic Dance and Beatbox. Out of Magical World, by Distorted Humor, he is from the family of Grade 1 winner Pleasant Home and Grade 2 winner Country Hideaway.

M.V. Magnier purchased a colt by Justify from the family of champion Rushing Fall for $1.1 million. Consigned by Denali Stud, agent for WinStar Farm Bred & Raised, he is out of stakes winner and Grade 3-placed Milam, by Street Sense.

Richard Knight Bloodstock, agent, spent the amount for the aforementioned filly by Justify from the family of champion Halfbridled.

“We all know how Justify has started as a stallion,” Knight said. “She is a queen of a filly. We are delighted to get her. She will stay over here (in America) and will be trained by Graham Motion. (The buyer) is the same partnership (that purchased the session-topper). The market is strong. If you want to buy the nice ones, you have to step up and pay for them. We only have a few (horses to consider); we are not following a long list. We are delighted to get the ones we have gotten so far.”

Consigned by Ashview Farm, agent, the filly is out of stakes-placed winner Fully Living, by Unbridled’s Song.

“We thought she could be a seven-figure filly, but you never know for sure,” Ashview’s Gray Lyster said. “She’s perfect. She’s the first filly we’ve bred ourselves to make a million (dollars in the sales ring). We’ve sold million-dollar yearlings for other people, but it’s a pretty big deal and it’s really hard to do. We’ve had a lot of success in this industry in raising racehorses, and it’s difficult to get $1 million for a horse and we’re really pleased.”

The sale of the filly is the latest success of the year for Ashview, which bred Belmont (G1) Presented by NYRA Bets winner Mo Donegal and three-time Grade 1 winner Nest. Ashview sold both horses at the 2020 September Sale.

“You’d like to think when you have success on the race track with horses you’ve raised, it would translate at the sales and I think that’s what tipped her a couple of extra bids,” Lyster said. “It’s been an awesome year.”

Also selling for $1.05 million was Imagination, a colt by Into Mischief purchased by Donato Lanni, agent for SF/Starlight/Madaket. Consigned by Bridie Harrison, agent for Peter E. Blum Thoroughbreds, he is out of Grade 2 winner Magical Feeling, by Empire Maker, and is a half-brother to stakes winner Exulting and Magical. His family includes Grade 1 winner Golden Ticket.

Courtlandt Farm paid $1.05 million for an Into Mischief colt from the family of Grade 2 winner Mrs McDougal. St George Sales, agent, consigned the colt, who is out of Moi, by Medaglia d’Oro.

Taylor Made Sales Agency, agent for Aaron & Marie Jones LLC, consigned a colt by Into Mischief who sold for $1 million to BC Stables. Out of Not in Jest, by Unbridled’s Song, he is from the family of Grade 1 winners Stop Traffic and Cross Traffic.

The third session of the September Sale, which marks the first day of the two-day Book 2, begins tomorrow at 11 a.m. ET. The entire sale is streamed live at Keeneland.com.