Brisk trade continued Thursday during the second session of the Keeneland November Breeding Stock Sale, which was led by the sale of Conquest Eclipse, a Grade 1 stakes-placed daughter of Malibu Moon in foal to Triple Crown winner Justify, for $650,000 to Clarkland Farm. She was consigned by Francis and Barbara Vanlangendonck's Summerfield, agent.

“Book 2 opened very well; it was very comparable to last year’s sale,” Keeneland Director of Sales Operations Geoffrey Russell said. “Young mares who were well-covered sold exceptionally well. The foals have strong criteria they have to meet, and those that made the criteria sold extremely well. We’ve seen a trend over the past few years of some end users coming into the weanling market. The last three years the weanling market has been exceptionally good, which gives pinhookers confidence to participate at the top end of the market.

“The best statistic today,” Russell added, “is the not-sold rate (of 21.67 percent). Trade was very, very good today and that bodes well for the rest of the week.”

Session topper Conquest Eclipse is a 7-year-old half-sister to stakes winner Bear’sway and from the family of Grade 1 winner Colonel John. Her dam is the Repriced mare Grand Traverse Bay.

“She was a gorgeous mare, and she was in foal to Justify. I really wanted a Justify,” Clarkland’s Fred Mitchell said. 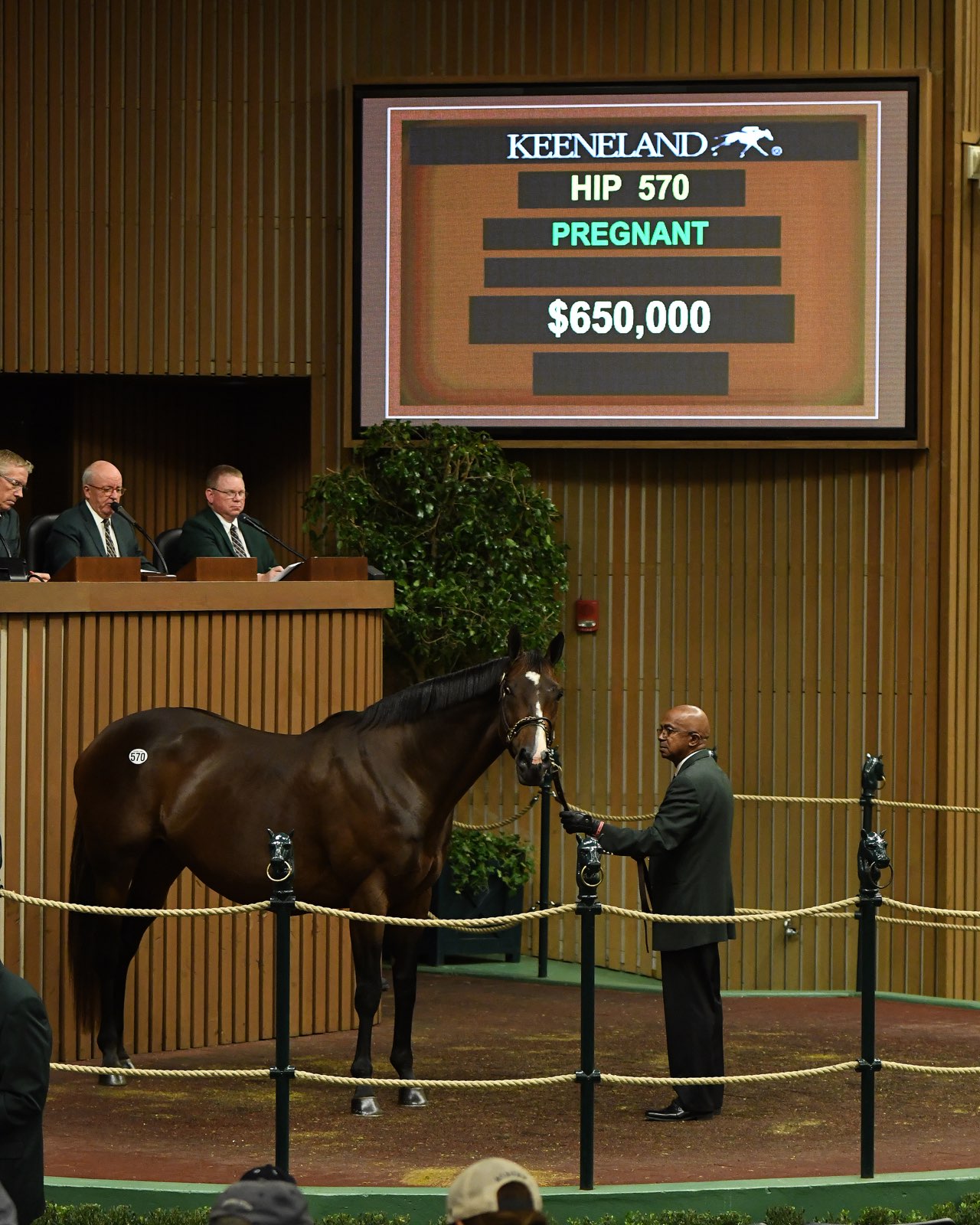 Mitchell said Clarkland is reinvesting some of its profits from Keeneland’s September Yearling Sale, where it sold six horses led by the $8.2 million sale-topper, a filly by Triple Crown winner American Pharoah out of Broodmare of the Year Leslie’s Lady who is a half-sister to four-time champion Beholder, Grade 1 winner Mendelssohn and Grade 1 winner and leading sire Into Mischief. During Wednesday’s opening session of the November Sale, Clarkland paid $700,000 for Fairyland, a daughter of Scat Daddy in foal to American Pharoah.

“We just hope luck stays with us,” Mitchell said. “We hope those mares throw beautiful foals for us. (The price for Conquest Eclipse) was a little bit more than I expected, but those mares are bringing a nice price here.”

Thursday’s top-priced weanling is a colt by Quality Road and from the family of multiple Grade 1 winner Zazu and Grade 2 winner Flashback that sold for $600,000 to China Horse Club/Maverick Racing.

Michael Wallace of China Horse Club said the purchase was “just an opportunity to acquire a quality colt by a quality stallion. He’ll go to our racing program. (Buying a weanling is) just trying to navigate the yearling market a little bit, which seems to be strong for these top-end colts. A way to get ahead a bit.”

He added, “The market is good, healthy, solid, and there’s plenty of people here.”

Out of the Birdstone mare Princess Aspen, the colt was consigned by St George Sales, agent.

“Any time you get that sort of money, it is a lot of money,” said Archie St George, who owns St George Sales with his wife, Michelle. “Hopefully, we will be seeing him down the road. Quality Road is an exceptional stallion, and breeder Dell Ridge Farm breeds really nice horses. He has a great family and a very good physical and he looks like a runner.”

Another Thoroughbred breeding operation that is a successful consignor to the September Sale and was active Thursday was Hinkle Farms, which paid $575,000 for the session’s third horse in the ring, the stakes-winning Harlan’s Holiday mare Ladies’ Privilege, carrying her first foal by More Than Ready.

“She is one of the nicest mares that we’ve seen at the sale,” Hinkle co-owner Anne Archer Hinkle, the farm’s Director of Operations, said. “Everything about her physically is so nice, and she really checked all the boxes for all three of us (with her father, Tom, and uncle Henry Hinkle). We really liked her a lot and think that she could carry a really nice foal. We breed to sell so we’ll bring her yearling out here in two years.”

On Wednesday’s Book 1 opening session of the November Sale, Hinkle paid $90,000 for the first horse in the ring, Ladies Night, a daughter of Eskendereya cataloged as a racing or broodmare prospect.

Don Alberto Corporation paid $510,000 for stakes-placed Jumby Bay, a 5-year-old daughter of City Zip in foal to Curlin. Bluewater Sales, agent, consigned Jumby Bay, who is out of the Tiznow mare Rote and from the family of Grade 1 winner Magnificent Song.

Shadwell Estate Company Ltd. went to $500,000 to acquire a weanling colt by Kitten’s Joy whose 2-year-old half-sister Selflessly won the 2019 Miss Grillo (G2) and was fifth in the Breeders’ Cup Juvenile Fillies Turf (G1). Nursery Place, agent, consigned the colt, also a half-brother to stakes winner Enchanted Ghost. Out of the Grand Slam mare Uniformly Yours, he is from the family of Grade 3 winner River Seven.

“We will take him back to Shadwell (Farm), and I have a feeling when Sheikh Hamdan sees him next September he’ll probably want to have him go to England to train with that pedigree,” Shadwell Vice President/General Manager Rick Nichols said. “He has a great conformation and good way of going – that’s the kind of colt you like to have. I wouldn’t have been surprised if he went for a little bit more than that.”

“He is a special horse,” Nursery Place owner John Mayer said. “Everything fell into place just right. With the 2-year-old half-sister (Selflessly) running like she did, it was just great. He was perfectly balanced the whole way through. He never set a foot wrong.”

M & M Bloodstock acquired two of the day’s top-priced horses, paying $500,000 for Liquorice Marilyn, a 3-year-old daughter of Candy Ride (ARG) in foal to Quality Road, and $475,000 for Pioneer Queen, a 3-year-old mare by Pioneerof the Nile in foal to Street Sense.

Lane’s End, agent, consigned Liquorice Marilyn, a half-sister to 2019 Schuylerville (G3) winner Comical from the family of Grade 1 winner Colonel John. She is out of stakes-placed Kayce Ace, by Tiznow.

Four Stars Sales, agent, consigned Pioneer Queen, a half-sister to Grade 1 winners Afleet Express and Embellish the Lace and stakes winner Reporting for Duty. She is out of the stakes-placed Distant View mare Expanse.

Yeguada Centurion was the leading buyer, purchasing seven horses for $1,415,000.

The November Sale covers 12 days through Sunday, Nov. 17, with all sessions beginning at 10 a.m. ET. Friday marks the second session of the two-day Book 2.