E Five Racing Thoroughbreds and Stonestreet Stables’ champion Good Magic roared past Flameaway in the upper stretch and went on to score a 1½-length victory in the 94th running of the $1 million Toyota Blue Grass (G2) for 3-year-olds before a crowd of 14,269 on a brisk Saturday afternoon.

In the Toyota Blue Grass, Good Magic, trained by Chad Brown and ridden by Jose Ortiz, covered the 1 1/8 miles on the fast main track in 1:50.18. It was the first victory in the race for Brown and Ortiz.

Purchased for $1 million at the 2016 Keeneland September Yearling Sale, Good Magic is a Kentucky-bred son of Curlin out of the Hard Spun mare Glinda the Good.

Longshot Arawak led the field of 14 through early fractions of :23.55 and :47.40, with Flameaway in closest pursuit. Meanwhile, Ortiz had Good Magic racing in the clear in fifth place.

As the field reached the far turn, Flameaway took over with Good Magic moving to his immediate outside and Sporting Chance ranging up in third.

Good Magic took charge early in the stretch and erased any doubt of the outcome. However, in deep stretch, Sporting Chance veered to the outside under Luis Saez and forced Free Drop Billy and Irad Ortiz Jr. to alter course.

Racing continues Sunday with a nine-race program that begins at 1:05 p.m. ET. Headlining the card are two stakes for 3-year-old fillies, the $200,000 Appalachian (G2) Presented by Japan Racing Association at a mile on the turf and the $150,000 Beaumont (G3) Presented by Keeneland Select contested over the Beard Course of 7 furlongs, 184 feet on the main track. 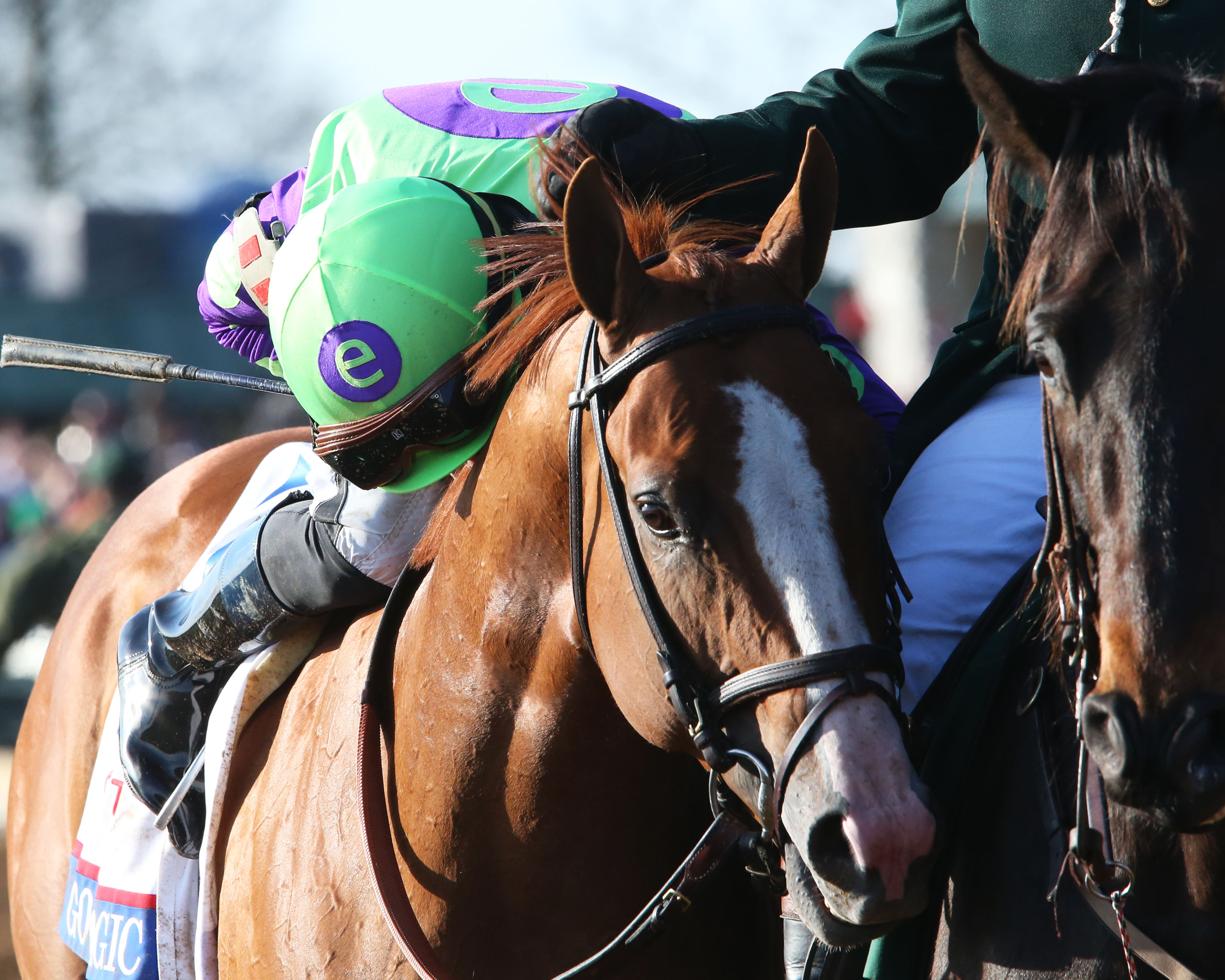 “In hindsight, (heading into the Fountain of Youth) he was probably a couple of works short.  If you want to stay on the (Kentucky) Derby (G1) trail, you have to run when it’s time to get started. This horse came out of that race real well – bigger, stronger and has had some impressive workouts since. We were pretty confident coming into this race. I love the way he did it today.

“We’ll get him over to Churchill (Downs) and give him at least one work over the track and hopefully get him out to a mile and a quarter and hopefully he can handle it.”

“It did remind me of it. Jose (Ortiz) rides this horse so well, and once again he put him in a position to win the race. I loved where he was all throughout the race – became a matter of is he good enough and fit enough today?

“I thought it was an outstanding performance. He was well-placed early and kept steady throughout. Maybe we dock one point where it looked like he jumped a shadow near the wire, but that’s him. He’s going to look around a little bit. I was really happy how he ran today. For only two starts this year, I was hoping to be peaking for the Derby and hopefully we’ll advance another step on Derby Day. Looks like is a very good crop of horses this year and it’s going to be a tough race.

“This is our first Blue Grass – we ran second the last two years. Once you get a little taste of that – Keeneland in the spring – you start looking to bring one back next year to win this race. It’s important – I’m so happy to win this race.”

On seeing snow on the ground this morning

“I was worried. The timing for the Derby – I really don’t’ want to run (Good Magic in a Derby prep) beyond today. As happens in Kentucky, (the weather) can change by the hour. Thankfully it turned out to be a wonderful day.

“He seems to love Keeneland. I’m going to think about (his schedule leading to the Derby), talk to my staff about it, talk to my team. Right now, I’m leaning toward leaving him here a couple of weeks, maybe getting his first breeze out of the way here, on a track I know he likes. Then get him over to Churchill – he’ll have at least one work at Churchill.”

“It was perfect, we had a good trip. We broke really well and everything went really well. The way I planned was to sit back a little bit off the front and everything turned out perfect. I was pretty confident on him because I know he’s a good horse out of the gate. I knew he was going to help me a lot and I was going to have a clear road to the first turn.”

“It means a lot. I really love Keeneland, I’m going to stay here for the whole meet. I really want to win a title here.”

“I got pressured the whole way around; (Flameaway) never got a breather. And you see, he's very tough. He keeps running and he kept trying. I was happy to see him do well.”

“He never gave up. He’s just so classy, you’ve got to love him. I got what I asked for. I said I wanted a fight at the top of the lane, and we got one. Unfortunately, we were second-best today. I think Chad (Brown) did a tremendous job. It’s one thing to train a horse to be a champion, and another to train them after they’re champions. We’ve beaten the winner of the Wood (Memorial-G2, Vino Rosso) twice already. I think we can hold our head high. (Flameaway will) be heading home (to Churchill Downs) probably tomorrow.”

Irad Ortiz Jr. (rider of Free Drop Bill, who finished fourth and was elevated to third following the disqualification of Sporting Chance)

Luis Saez (rider of Sporting Chance, who finished third and was disqualified to fourth)

“I thought he was going to win. He was perfect (until) we came to the wire. When I hit him he (veered) out. He did it twice today. I don't know why he does that. He was perfect today up until then.”

“He has shied twice with Luis with the left-handed stick and I guess he doesn’t like it. He has never given any indication in the morning (training sessions). He is probably the easiest horse in the barn to train.

“We needed those 40 points (for second place) to get to the Derby and now we only have 12.”

“We had a good trip. He traveled very nice for me. The winner came from the outside of me, and went by pretty early. I just could not keep up with him.”

“I had a good trip. My horse didn’t show any speed. I was lucky enough to find a path on the rail, but when he got through, he just couldn’t get it done today.”