Grade 1 winner and millionaire Concrete Rose will be offered as a racing or broodmare prospect during the premier Book 1 of this year’s Keeneland November Breeding Stock Sale, which begins Monday, Nov. 9, and follows the Breeders’ Cup World Championships at Keeneland on Nov. 6-7. Concrete Rose, a 4-year-old daughter of successful young sire Twirling Candy who has won six of seven races and earned $1,218,650, will be consigned by Lane’s End, agent for co-owners Ashbrook Farm and BBN Racing.

“We’re excited to offer Concrete Rose as a racing or broodmare prospect with such great companies as Lane’s End and Keeneland,” Ashbrook Racing Manager Bo Bromagen said. “Working with them as partners gives us the greatest opportunity to showcase her.”

“Lane’s End proudly welcomes Grade 1 winner Concrete Rose back to our sale consignment, this time as a racing/broodmare prospect at Keeneland November,” Lane’s End Director of Sales Allaire Ryan said. “Concrete Rose was previously sold by Lane’s End at Keeneland September in 2017 and from the start of her racing career has been a banner sale graduate for us and for our versatile resident stallion Twirling Candy. To date, she is the sire’s leader of lifetime top performers with over $1.2 million in career earnings – more than Grade 1-winning sons Gift Box and Collusion Illusion.

“We are thrilled for the opportunity to highlight our November consignment with a filly of her caliber,” Ryan added. “Her combined talent, looks and breeding will make her a sought-after prospect for any top-level program.”

“Concrete Rose is a once-in-a-generation elite athlete that everyone dreams of owning,” BBN Racing Founding Partner Brian Klatsky said. “It’s been an honor and a privilege for all of our partners at BBN Racing to be associated with her. She has already created memories of a lifetime and is not done yet.”

“She is something to have in your barn,” trainer Rusty Arnold said. “Great mind on her. She is not complicated. She is easy to train. You hear this from trainers, but she is one of those horses you just stay out of her way and she’ll say ‘I’ll get the rest done.’ ”

Concrete Rose’s connections had high hopes for the filly when she began her career in a maiden race at Saratoga at odds of 12-1.

Advancing to graded stakes company in her next start, Concrete Rose proved her talent with a 3-length triumph in Keeneland’s JPMorgan Chase Jessamine (G2). 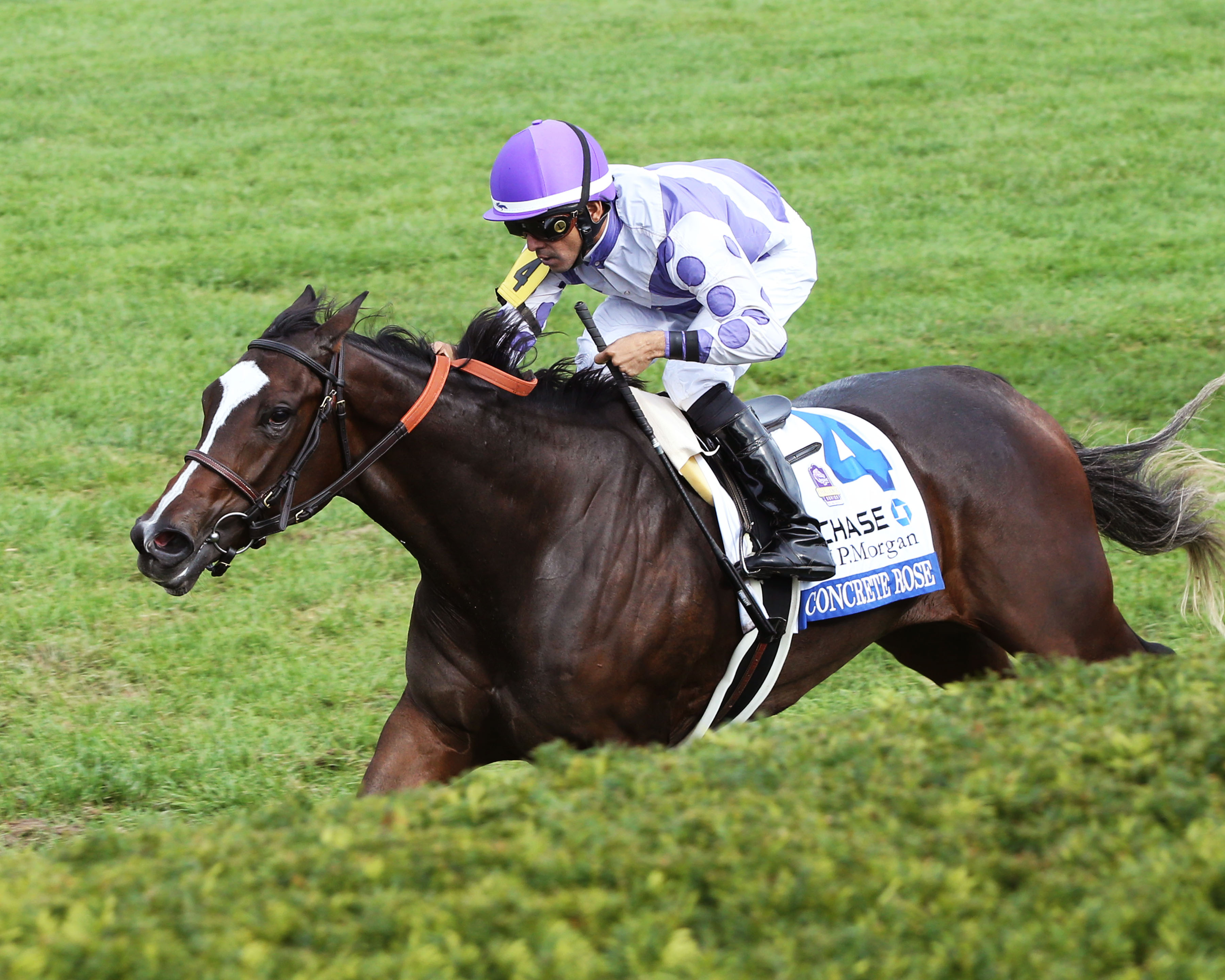 “She’s beautiful, incredibly athletic, stands over some ground,” Bromagen said. “She’s well-balanced with a great shoulder and hip. But her mind really makes her stand apart. She’s incredibly smart. When she progressed from her 2- to 3-year-old year, you could sense the change in her personality from doing things on talent to really taking ahold of the bit and going after them.”

Concrete Rose opened her 3-year-old campaign with a win in the Florida Oaks (G3) at Tampa Bay Downs and remained undefeated for the year. Her outstanding performance at Churchill Downs on Kentucky Oaks Day in the Edgewood (G3), in which she defeated Breeders’ Cup Juvenile Fillies Turf (G1) winner Newspaperofrecord (IRE) by 3¾ lengths, cemented her status among the sport’s most talented 3-year-old fillies on turf. She polished her resumé in her next race with a nearly 3-length victory in the $750,000 Belmont Oaks Invitational (G1), a showcase of division standouts. 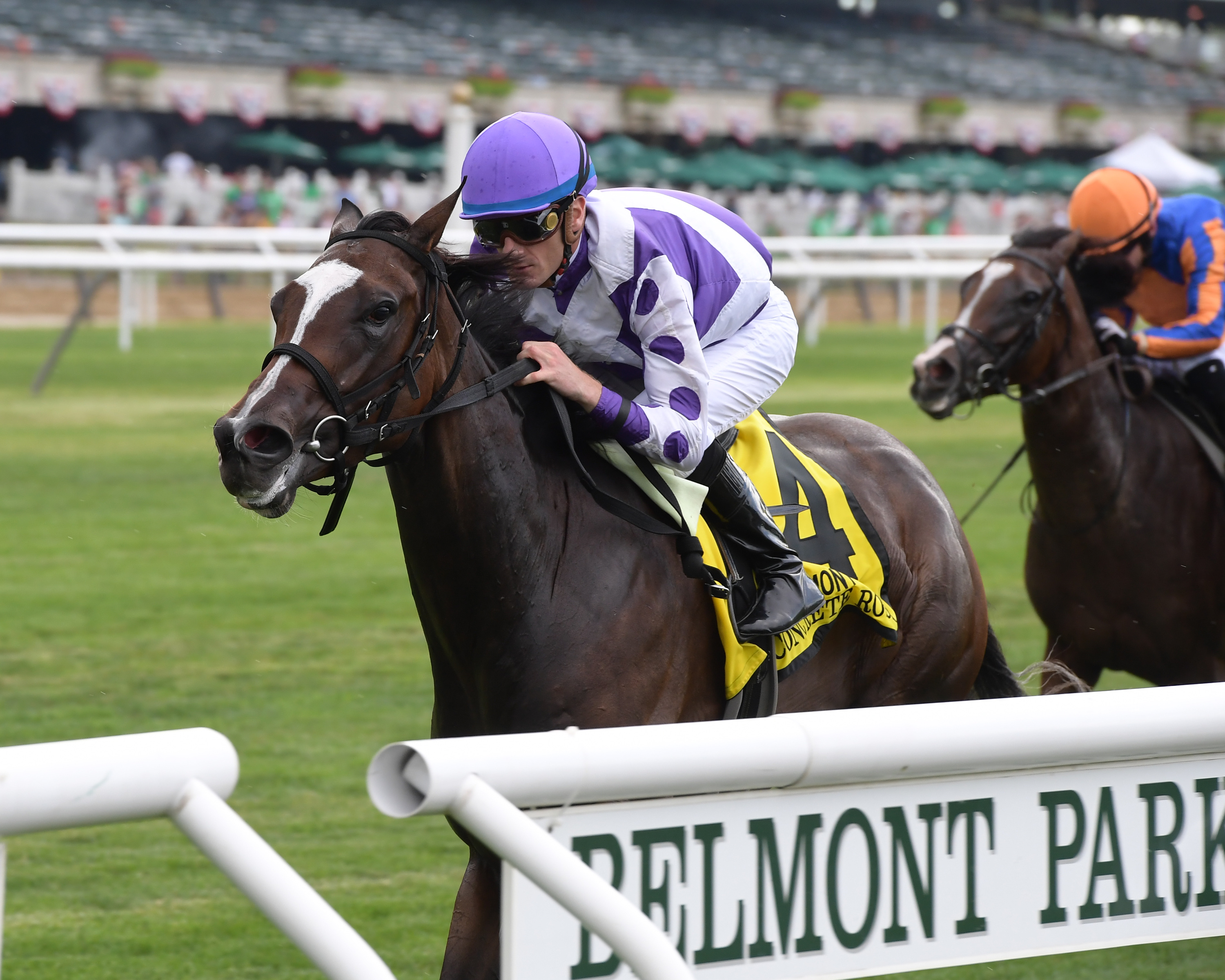 That dominance continued in her next race at Saratoga, where she won the inaugural $750,000 Saratoga Oaks Invitational by 4¾ lengths. With the victory, the superstar captured two-thirds of the New York Racing Association’s new Turf Tiara series.

“I’ve never seen a filly win by the margins that she did on the turf,” Arnold said. “Usually turf races are very close; the runners all stay together. Other than her Tampa race, which was coming off a layoff, she never had a close race.”

“Watch the replays of her races,” Bromagen said. “The greatest testament to her ability is what she’s shown on the race track: the horses she beat and the level of competition.”

Out of the winning Powerscourt (GB) mare Solerina, Concrete Rose is from a family of successful North American and international performers. Her family includes Horse of the Year and Kentucky Derby (G1) winner Ferdinand.

“Concrete Rose is an extremely accomplished racehorse – one of the best of her generation in her division – and her future is exciting whether she returns to the race track or begins her career as a broodmare,” Keeneland President-Elect and Interim Head of Sales Shannon Arvin said. “Keeneland is thrilled for the opportunity to present Concrete Rose at the November Sale with all the support a performer of her stature deserves.”