The resiliency of the Thoroughbred industry was highlighted this week at Keeneland’s January Horses of All Ages Sale, which ended today with gross sales of more than $45 million, boosted by a number of prominent dispersals: 21 in-foal broodmares from Canada’s acclaimed Sam-Son Farm; 39 mares, yearlings and horses of racing age from Lane’s End, agent for the Complete Dispersal of the Estate of Paul Pompa Jr.; and 41 mares, yearlings and horses of racing age from Hill ‘n’ Dale Sales Agency, agent for the Dispersal of Spry Family Farm. 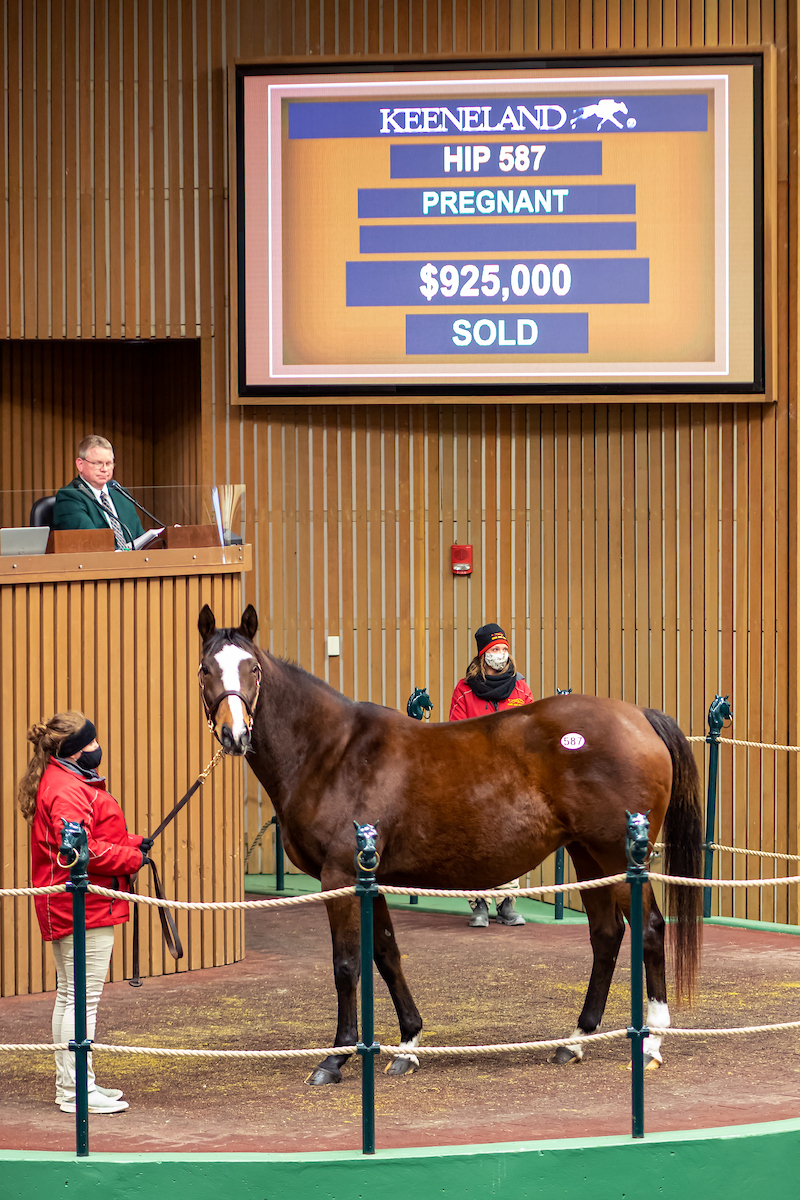 During Tuesday’s second session of Book 1, the Sam-Son and Pompa offerings produced two horses each sold for the sale-topping price of $925,000. Gainesway Farm paid the amount for Danceforthecause, a daughter of Giant’s Causeway in foal to Twirling Candy, from Sam-Son. Peter Brant’s White Birch Farm went to $925,000 for the Animal Kingdom mare Regal Glory, a multiple graded stakes winner for Pompa, via phone bidding with a Keeneland representative. 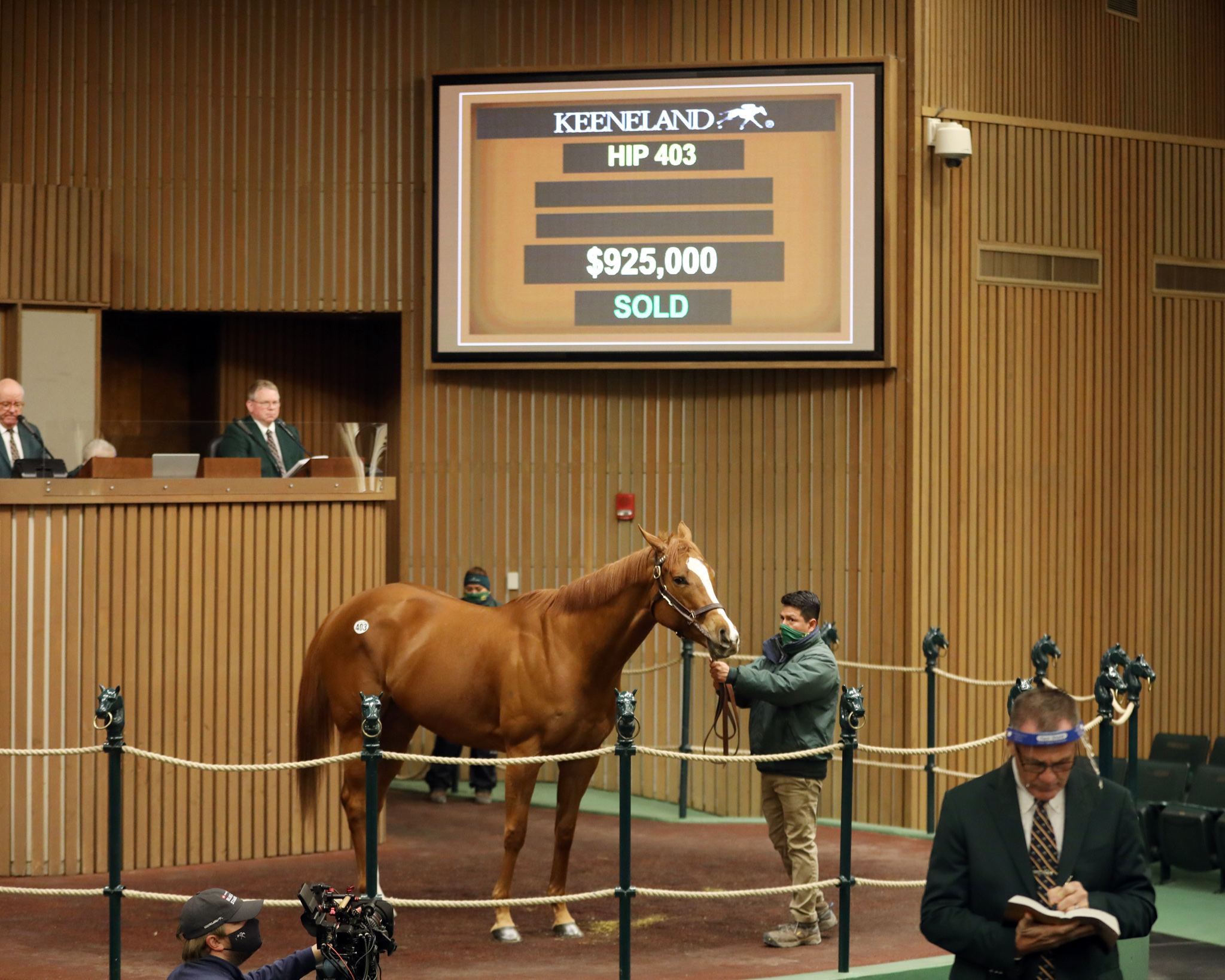 “The continued stability of the market is a testament to the hard work of all our sales participants, who have adjusted their operations and their expectations to meet the challenges of this unprecedented time,” Keeneland President, CEO and Interim Head of Sales Shannon Arvin said. “The Sam-Son and Pompa dispersals are the legacies of two wonderful operations, and they infused a lot of positive energy into the January Sale. Dispersals are always bittersweet, but we are honored that their families and connections entrusted Keeneland to present these dispersals and showcase their excellence.”

As it did for the 2020 September Yearling and November Breeding Stock Sales, Keeneland held the January Sale with extensive COVID-19 protocols for the health and safety of participants. Consignors were able to post videos and photographs of their horses on Keeneland.com to assist remote buyers in evaluating the catalog offerings. Buyers in attendance could bid from the outdoor Show Barn just behind the Sales Pavilion to permit greater social distancing, while others who did not attend could participate in the bidding by internet or phone.

“This is our third sale during this uncommon time, and we thank our consignors, buyers and agents for their perseverance and for adapting to the changes we have had to make,” Keeneland Director of Sales Operations Geoffrey Russell said. “As a result, the January Sale was able to provide a steady marketplace. Foals sold well, as did quality broodmares. As we’ve seen for quite some time, there is a competitive market for a nice horse.”

“The pandemic has been difficult, but trade didn’t stop,” Maronde said. “Buyers who were not able to attend found ways to participate. We now look forward to welcoming everyone back to Keeneland, hopefully soon, under more normal circumstances.”

On Day 2 of the sale, the Sam-Son Dispersal offered members of coveted female families nurtured for generations by the multiple award-winning breeding and racing operation founded in 1972 by the late Ernie Samuel. Six horses sold for $400,000 or more. Joining Danceforthecause in that group were Deceptive Vision (sold to Hill ‘n’ Dale at Xalapa for $900,000), Southern Ring (purchased by Phil Schoenthal, agent for Determined Stud for $875,000), Mythical Mission (Shimokobe Farm/Polo Green Stable, agent, $575,000), Fun in the Desert (Hill ‘n’ Dale at Xalapa, $530,000) and Theatric (Greg and Caroline Bentley, $400,000).

To help promote the dispersal, Sam-Son conducted a broodmare parade three days before the horses sold. Keeneland Director of Auctioneers Ryan Mahan and announcer Kurt Becker hosted the event, which Keeneland produced and livestreamed on its website.

“Keeneland was very good to us and the (Samuel) family was grateful for the show that was put on,” Sam-Son Farm Manager Dave Whitford said. “Our courtyard (barn area) was wonderful; we could not have asked for better. We were very well received with people looking at our mares. We got a lot of compliments and were very pleased. The people who bought our mares also were very pleased.”

Whitford said the January Sale was a fitting showcase for the mares.

“We talked about waiting until November 2021, but of course we would have to foal all the mares and get them back in foal,” he said. “That would have delayed the process. We were confident we would stand out in January. We were very pleased.”

During the second session, Schoenthal, agent for Determined, purchased three members of the Sam-Son and Pompa Dispersals among the five horses they acquired through the ring for $2.12 million to be the sale’s leading buyer. Their most expensive acquisition, the aforementioned Southern Ring, is a Grade 3-winning daughter of Speightstown in foal to Into Mischief. She is out of stakes winner Seeking the Ring, by Seeking the Gold, and from the family of Canadian champion Catch the Ring.

Into Mischief was the sale’s leading covering sire by average (with three or more sold) with three in-foal mares averaging $531,667.

Held during the second and fourth sessions of the sale, the Pompa Dispersal included six horses that brought $500,000 or more.

“Mr. Pompa’s program has been meticulously managed and it shows,” Lane’s End Sales Director Allaire Ryan said. “It is nice to see the top agents and buyers giving these horses the respect they deserve. Mr. Pompa would be pleased.”

Among the highest-priced Pompa horses was stakes winner Beautiful Lover, a 5-year-old daughter of Arch sold to Moyglare Stud Farm for $650,000. A half-sister to Grade 2 winner Zivo, Beautiful Lover is scheduled to return to racing.

Schoenthal, agent for Determined, purchased two horses from the Pompa Dispersal. They paid $570,000 for Off Topic, a 5-year-old Grade 1-placed daughter of Street Sense consigned as a racing or broodmare prospect. She is from the family of Grade 1 winners Miner’s Mark, Traditionally and My Flag.

They also spent $320,000 for Sustained, an 11-year-old, graded stakes-placed daughter of War Front in foal to Connect. Out of Sweetstorm Amy, by Lemon Drop Kid, Sustained is the dam of Grade 3 winner Turned Aside, who won the Aqueduct Turf Sprint Championship (L) in November and sold to West Point and DJ Stable, L. E. B., agent, for $725,000 during the final session.

Selling to BBA Ireland for $500,000 from the Pompa Dispersal was Regal Glory’s dam, Mary’s Follies, a 15-year-old daughter of More Than Ready. She also is the dam of Grade 3 winner Night Prowler and Japan Group 3 winner Café Pharoah.

Horses of racing age from the Pompa Dispersal highlighted the final day of the January Sale. The session topper at $875,000 was Carillo, a 3-year-old colt by Union Rags who won his career debut Jan. 8 at Aqueduct and was purchased by Lauren Carlisle, agent. She said the colt would resume his career with trainer Tom Amoss.

“He’s an exciting 3-year-old colt and hopefully he improves off (his first) effort and we will try to go longer with him,” Carlisle said. “We didn't want to spend that much but if you’re in the market for a 3-year-old colt before (the Kentucky Derby-G1) you're going to have to spend. We're happy to get him.”

“It is very rare to find a horse like this (to buy),” Finley said. “(Turned Aside’s former trainer) Linda Rice did a great job with him. I got to know Paul about 10 years ago. He was a kind and classy guy, and you never heard a cross word about Paul Pompa. I hope we can carry on his legacy. He built a beautiful program. They won and they did it in style. I was a huge fan. We in the industry are heartbroken and sad that we don’t have Paul around anymore. We will do our best to sustain his legacy.”

Held on the first and third days of the auction, the Spry Dispersal resulted in total sales of $1,405,900, led by Sand Hill Stables’ purchase of the Maclean’s Music yearling colt Mac’s Prize on opening day for $200,000. He is out of the Tapit mare Heavenly Tap, a half-sister to Grade 1 winner Instilled Regard and from the family of champion Heavenly Prize and Grade 1 winners Oh What a Windfall, Good Reward and Persistently.

Acquiring seven horses for $1,654,000, Larry Best’s OXO Equine was second among buyers at the January Sale by expenditures. Best purchased the three highest-priced yearlings: a colt by Munnings, who topped the opening session at $475,000, along with a $400,000 filly from the first crop of City of Light and a $320,000 filly by Speightstown.

City of Light was the sale’s leading sire of yearlings with eight horses selling for $1,225,500.