St. George Stable’s homebred Letruska lived up to her lofty billing as the top mare in the country by posting a front-running 1¾-length victory in the 66th running of the $500,000 Juddmonte Spinster (G1) for fillies and mares Sunday afternoon.

Trained by Fausto Gutierrez and ridden by Irad Ortiz Jr., Letruska covered the 1 1/8 miles on a fast main track in 1:49.01. For Gutierrez, it is his first Keeneland stakes victory and the ninth for Ortiz, who also won the Juddmonte Spinster in 2015 on Got Lucky. 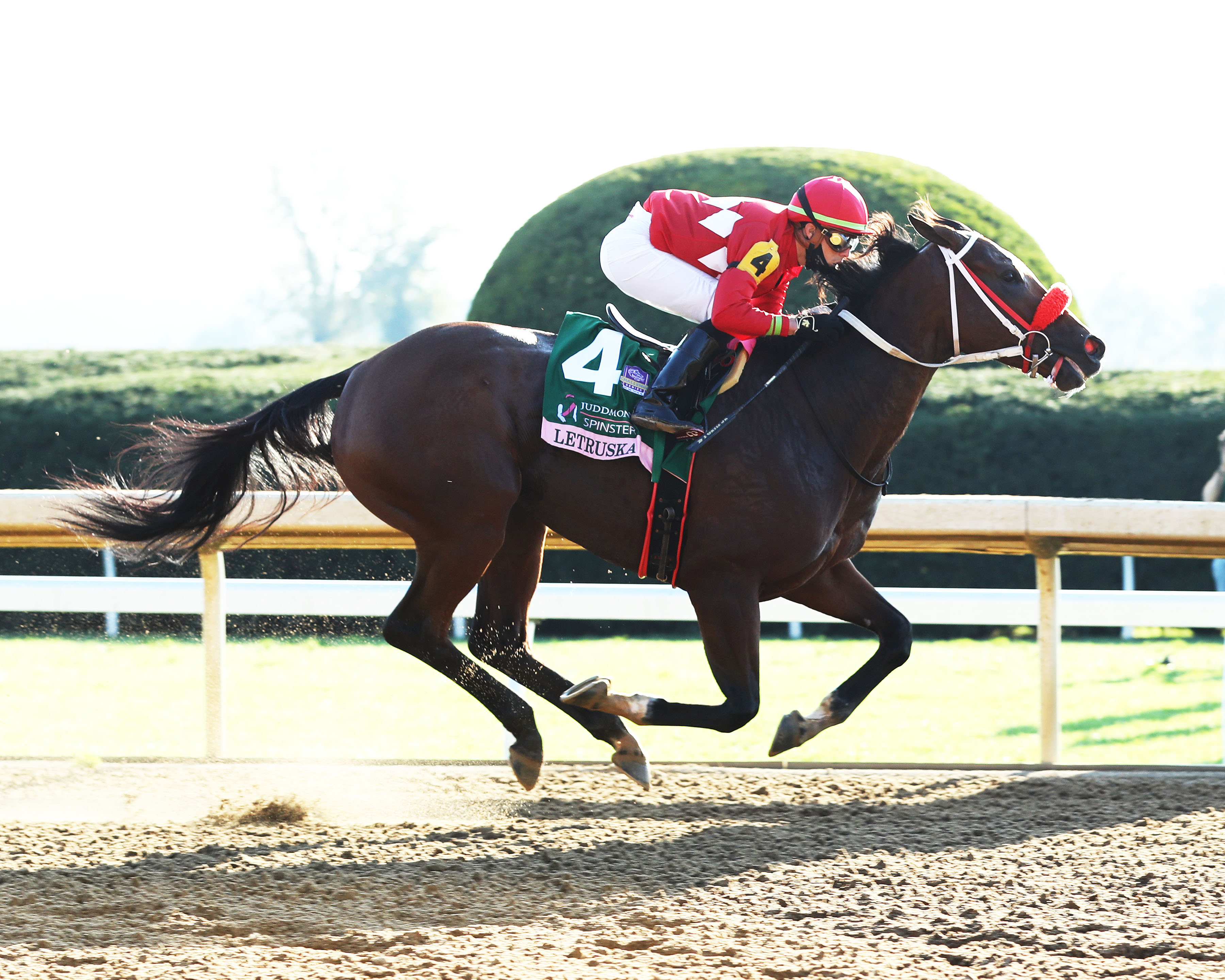 Letruska quickly established a daylight advantage on her rivals while cutting out fractions of :24, :47.89 and 1:12.52. She never was challenged in the run to the finish to win for the sixth time in seven starts in 2021 and notch her fourth Grade 1 victory of the year.

It was another 2½ lengths back to Crystal Ball in fourth with Envoutante and Town Avenger following in order.

Phoenix Thoroughbred III’s favored Tiz the Bomb, who broke through the gate prior to the start of the race, launched a huge run in the final eighth of a mile to draw away by three-quarters of a length and win the 31st running of the $200,000 Castle & Key Bourbon (G2) for 2-year-olds. 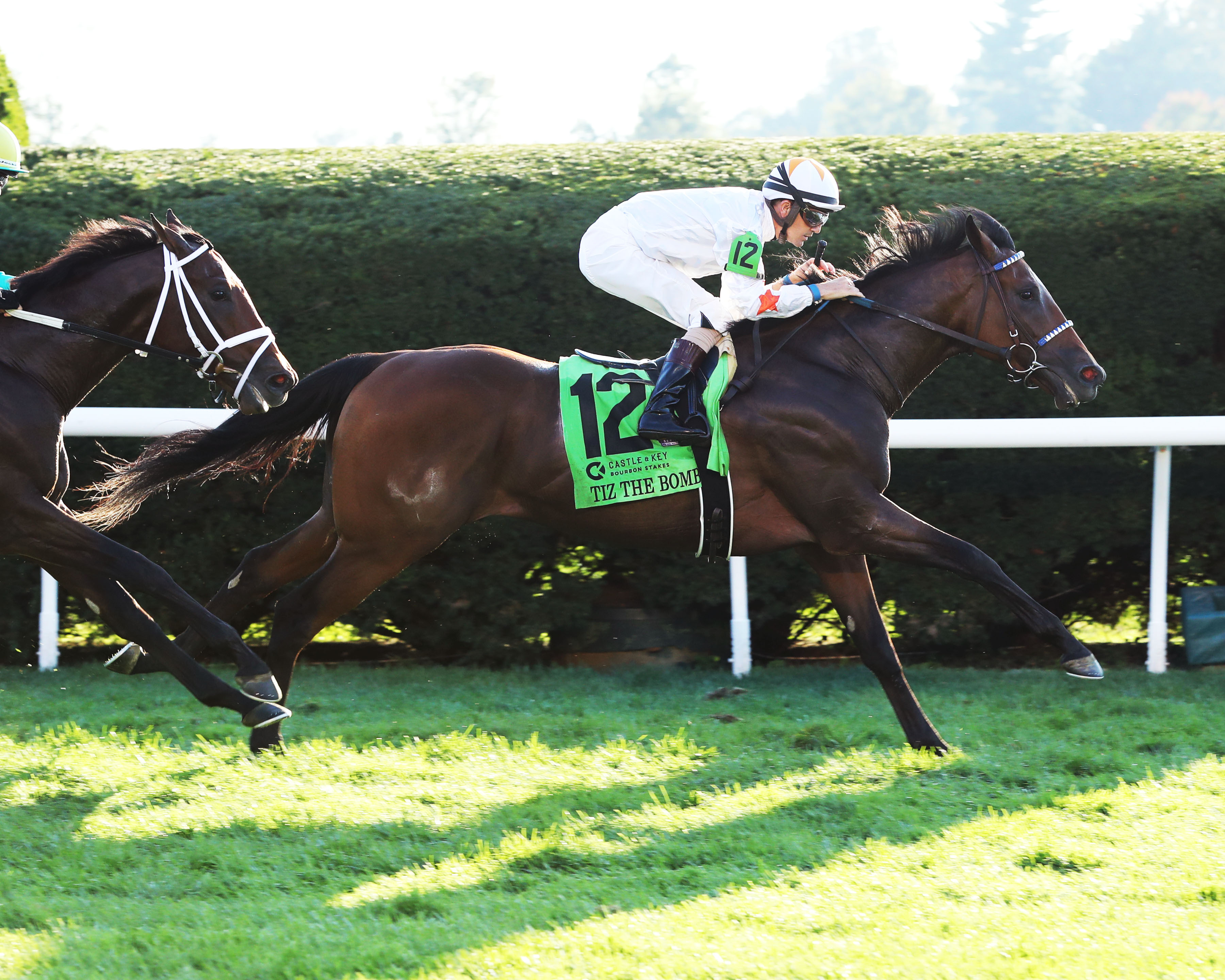 Heaven Street, Play Action Pass and Dowagiac Chief dueled for the early lead through fractions of :22.94 and :47.54 as Tiz the Bomb and second choice Red Danger tracked the leaders in the second flight.

As the field bunched up entering the stretch, Red Danger surged to the front while Tiz the Bomb was shuffled back. Tiz the Bomb kicked in again at the eighth pole, surged by the leaders at the sixteenth pole and was unthreatened in the final yards.

Now a two-time stakes winner on turf, Tiz the Bomb is a Kentucky-bred son of Hit It a Bomb out of the Tiznow mare Tiz the Key. A winner of three of four starts, Tiz the Bomb increased his earnings to $447,841 with Sunday’s $120,000 check.

It was another three-quarters of a length back to Red Danger, who was followed in order by Dowagiac Chief, Rocket One, Play Action Pass, Lucky Boss, On Thin Ice, Brit’s Wit, Martini’nmoonshine, Heaven Street, Fast N Steady and Waita Minute Hayes.

Hat Creek Racing’s Averly Jane rocketed to the front after the gates opened and cruised to a 3-length victory in the fourth running of the $200,000 Indian Summer (L) Presented by Keeneland Select for 2-year-olds.

Ridden by Tyler Gaffalione and trained by Wesley Ward, Averly Jane covered the 5½ furlongs on a turf course labeled as good in the stakes-record time of 1:02.65. It is the second victory in the race for Ward, who saddled Kimari to win the 2019 running. 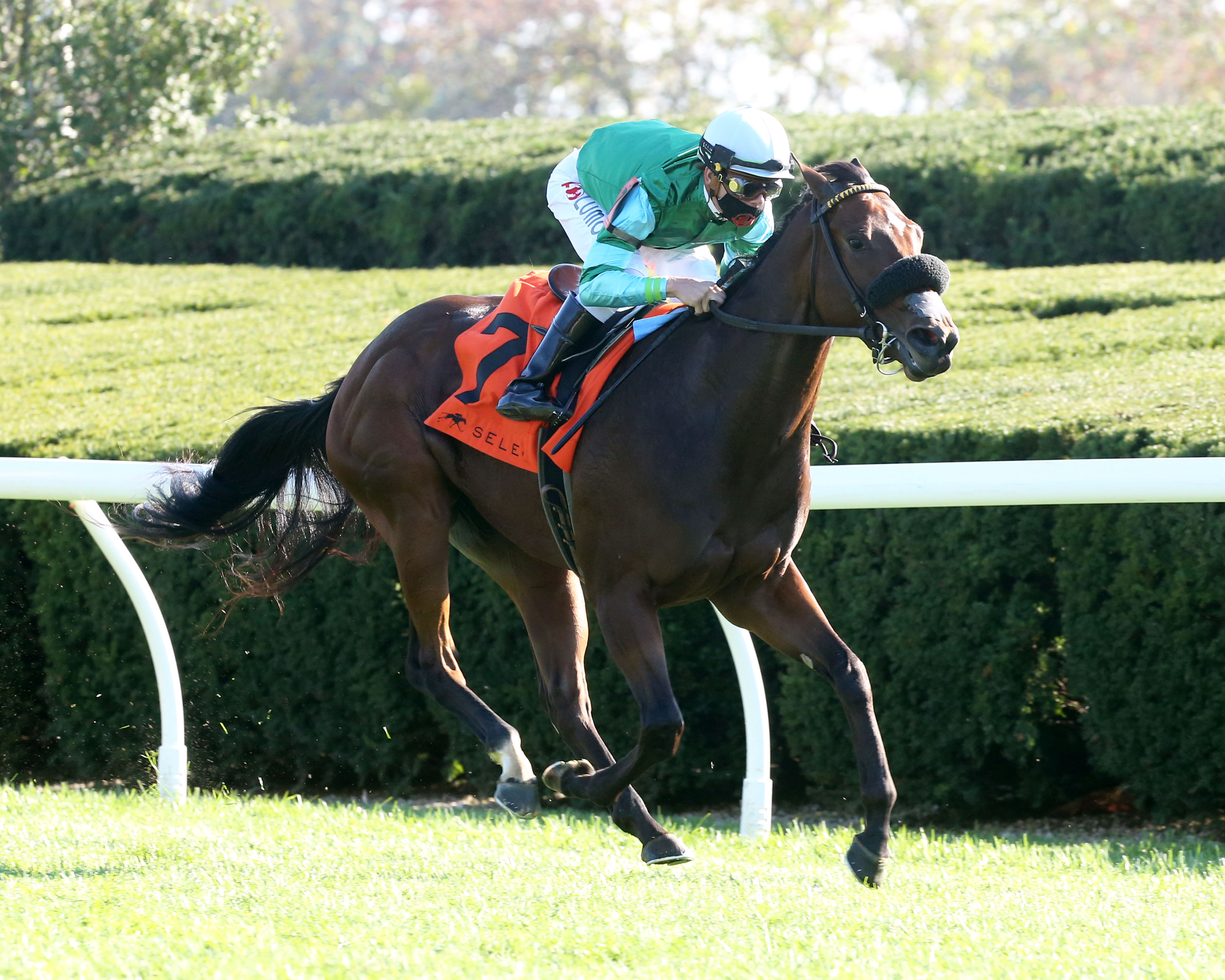 Undefeated in three starts on the dirt, Averly Jane went right to the front in her turf debut and ripped off an opening quarter-mile in :21.64 and the half-mile in :44.50 while under no pressure and giving Gaffalione his third victory on the filly.

Now a three-time stakes winner, Averly Jane is a Kentucky-bred daughter of Midshipman out of the Richter Scale mare Sh Sh Shakin’. With Sunday’s $120,000 check, Averly Jane increased her earnings to $313,140.

Averly Jane returned $3.80, $2.40 and $2.20. Stablemate Kaufymaker rallied for second and returned $3.40 and $2.80 under Irad Ortiz Jr. with Circle Back Jack finishing another neck back under Robby Albarado and returning $7 to show.

Averly Jane and Kaufymaker were the lone fillies in the race.

It was another neck back to Detroit City with Pure Panic, Roman Poet, Big Boss Ben, Bonus Appreciation and Diamond City following in order.