Bonne Chance Farm and Stud R D I’s In Love (BRZ) surged to the front just past the eighth pole and went on to post a 1½-length victory in the 36th running of the $750,000 Keeneland Turf Mile (G1).

In the Keeneland Turf Mile, In Love earned a fees-paid berth into the FanDuel Breeders’ Cup Mile (G1) Presented by PDJF to be run Nov. 6 at Del Mar.

Trained by Paulo Lobo and ridden by Alex Achard, In Love covered the mile on a turf course labeled as good in 1:34.84. For Lobo, it is his second victory in the race having won last year with Ivar (BRZ), who finished fourth in his repeat bid. For Achard, this is his first Grade 1 victory.

Brown Storm (CHI) led the field of 12 through early fractions of :23.37 and :47.30 as In Love raced in midpack while getting a ground-saving trip along the rail. Achard kept In Love inside until the top of the stretch when he swung out six wide to launch his bid that carried him to the front at midstretch and on to victory. 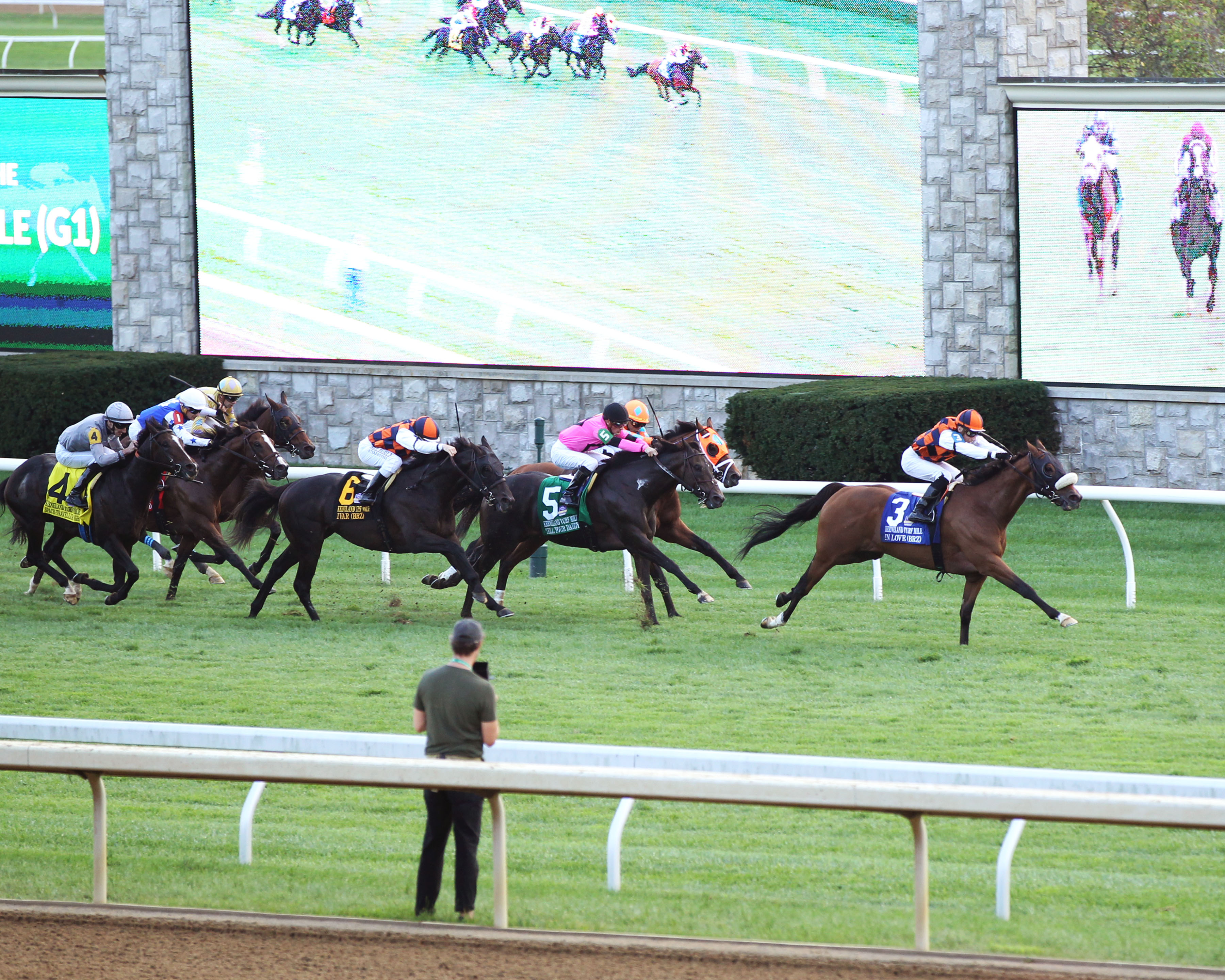 It was another head back to Ivar in fourth with Space Traveller (GB), Front Run the Fed, Pixelate, Diamond Oops, Argentello (IRE), Monarchs Glen (GB), Brown Storm and favored Order of Australia (IRE) following in order.

Lucky Seven Stable’s Rattle N Roll made a sweeping move on the far turn and then rocketed by the field at the head of the stretch to draw off for a 4¼-length victory in the 108th running of the $500,000 Claiborne Breeders’ Futurity (G1) for 2-year-olds.

By virtue of the victory, Rattle N Roll earned a fees-paid berth into the TVG Breeders’ Cup Juvenile (G1) Presented by Thoroughbred Aftercare Alliance to be run Nov. 5 at Del Mar.

Trained by Kenny McPeek and ridden by Brian Hernandez Jr., Rattle N Roll covered the 1 1/16 miles on the fast main track in 1:43.78. The victory is the third in the race for McPeek, who also won in 1994 with Tejano Run and 2009 with Noble’s Promise.

Favored Classic Causeway was sent hard out of the gate from the outside No. 13 post and led the field through fractions of :22.81, :46.74 and 1:11.90 with Stellar Tap and Mr. Bouma in closest pursuit early on.

On the far turn, Hernandez angled to the outside and began picking off horses with a move that put him on even terms with Classic Causeway and Stellar Tap turning for home. With that momentum, Rattle N Roll quickly opened up and never was threatened in the run to the finish line. 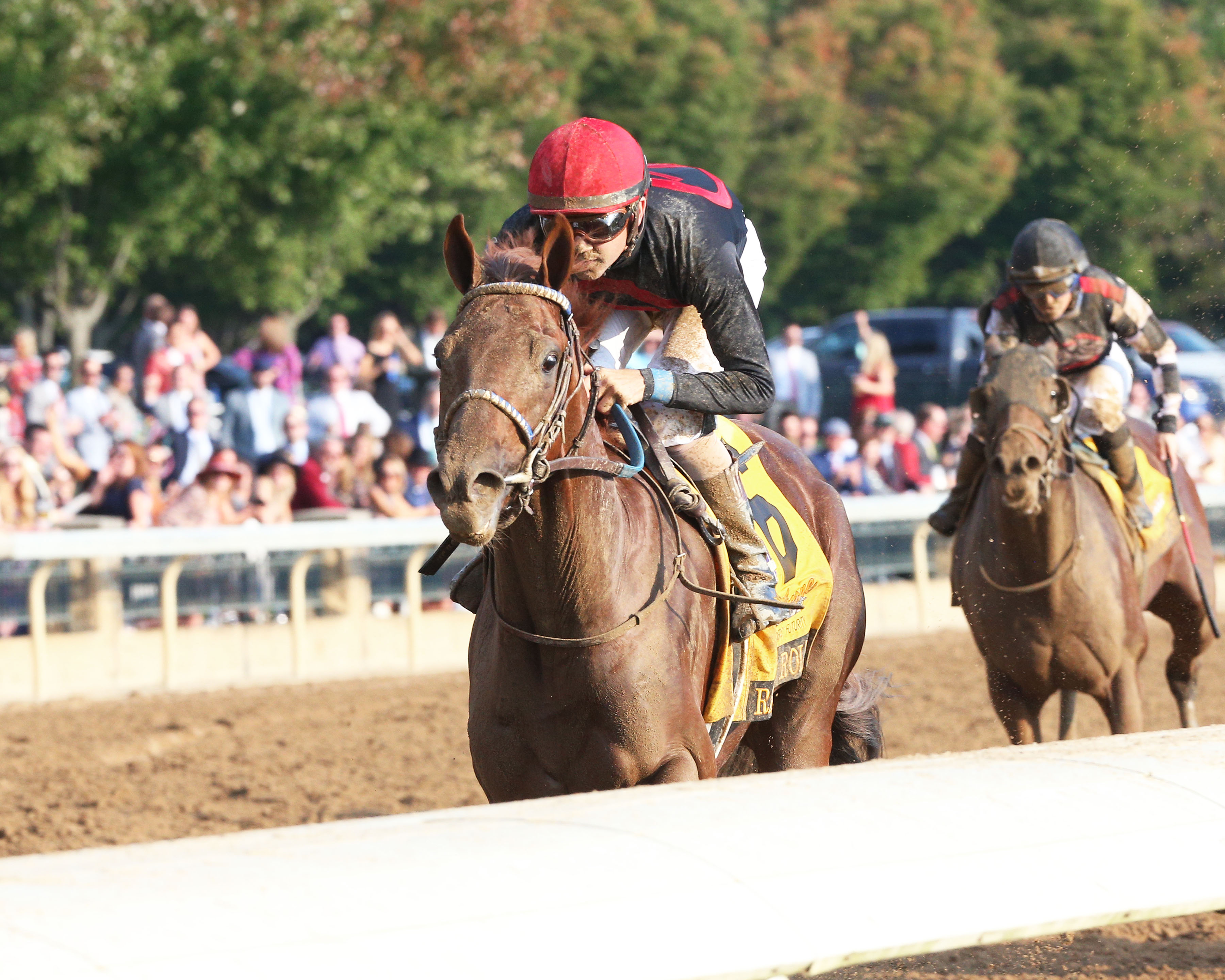 Rattle N Roll returned $19.40, $8.60 and $5. Double Thunder rallied from far back under Paco Lopez to get second and return $7.40 and $4.60 with Classic Causeway finishing another half-length back in third under Jose Ortiz and paying $3 to show.

Peter Brant’s Blowout (GB) went to the front out of the gate and then turned back a deep stretch challenge from stablemate Regal Glory to win the 24th running of the $400,000 First Lady (G1) Presented by UK HealthCare for fillies and mares by a half-length.

By virtue of the victory, Blowout earned a fees-paid berth into the Maker’s Mark Breeders’ Cup Filly and Mare Turf (G1) to be run Nov. 6 at Del Mar.

Trained by Chad Brown and ridden by Flavien Prat, Blowout covered the mile on a turf course rated as good in 1:34.86. It is the fourth consecutive victory in the race for Brown and fifth overall.

Blowout led the field of 12 through fractions of :23.76, :47.75 and 1:11.67 while maintaining a daylight advantage. At the head of the stretch, Regal Glory ranged up to the outside of Blowout and the two raced on near even terms until the final yards when Blowout spurted clear. 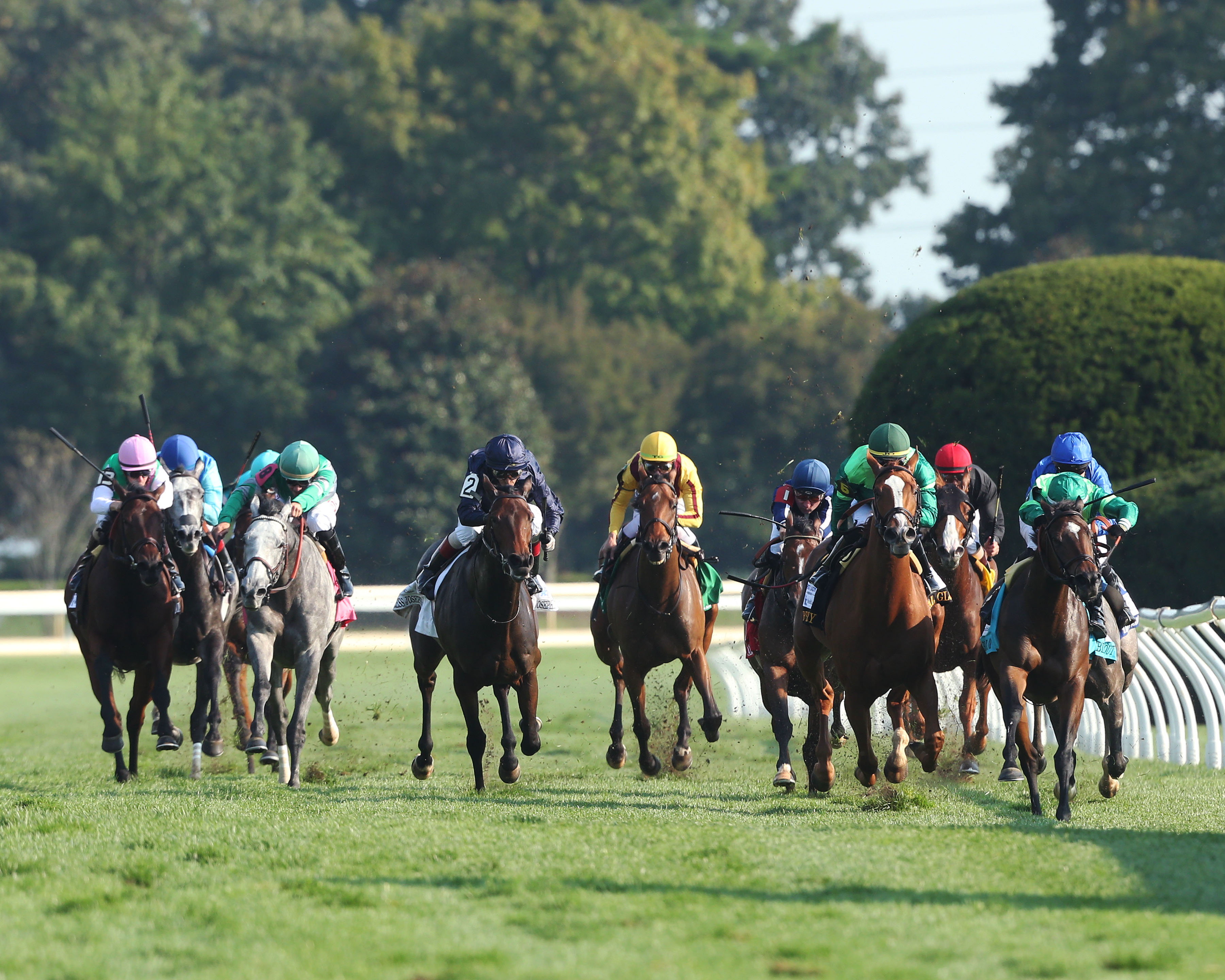 Blowout is a 5-year-old daughter of Dansili (GB) out of the Deep Impact (JPN) mare Beauty Parlour (GB).

Favored Althiqa (GB) was another 1 ½ lengths back in fourth and was followed in order by Abscond, Viadera (GB), Harvey’s Lil Goil, Daddy Is a Legend, Dalika (GER), Hendy Woods, Star Command and La Signare (FR).

Lothenbach Stables’ Bell’s the One, last early in the field of six, moved to the front at the eighth pole and held on through a furious stretch drive to prevail by a neck and win the 41st running of the $250,000 Thoroughbred Club of America (G2) for fillies and mares. 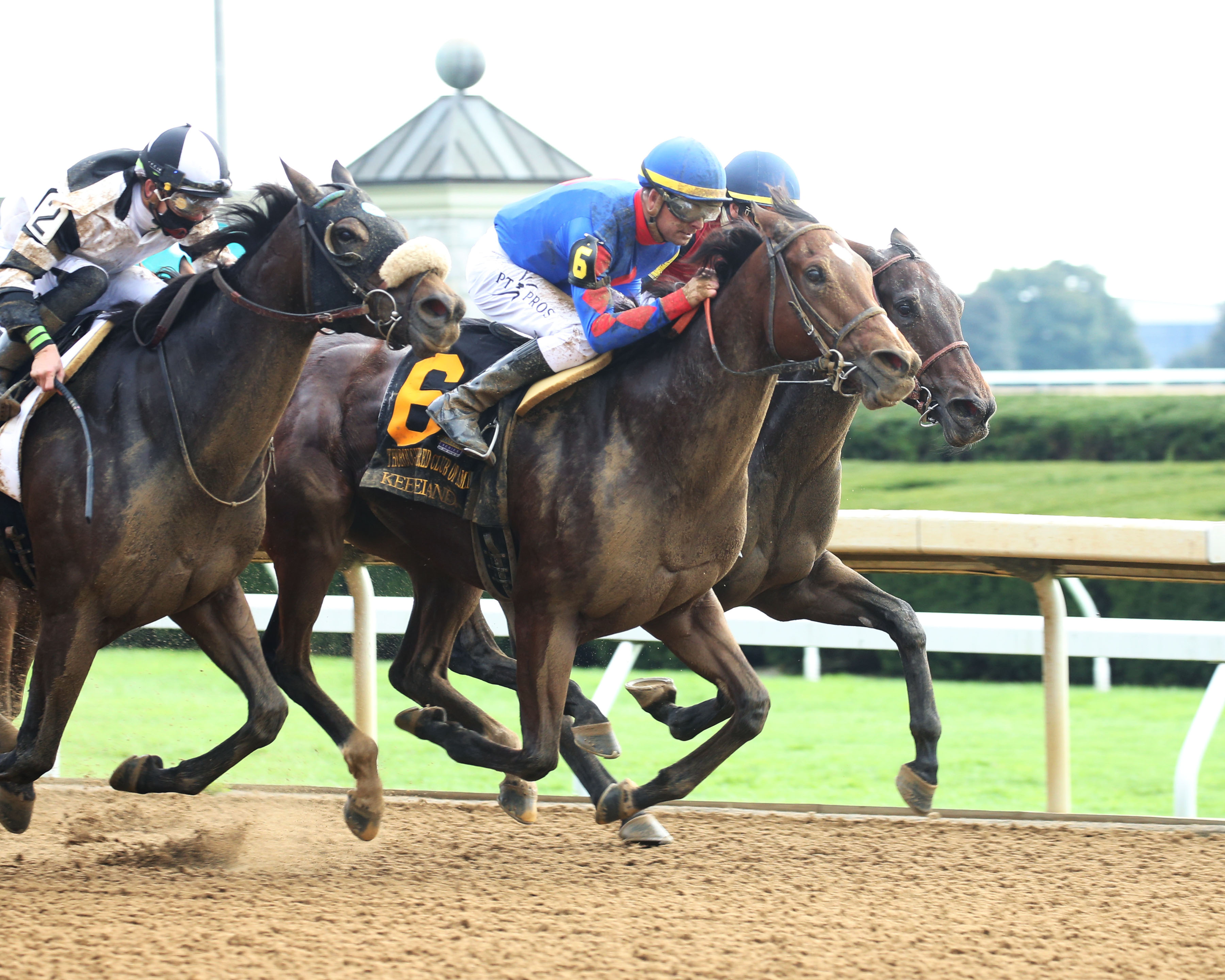 With the victory, Bell’s the One earned a spot in the starting gate for the Breeders’ Cup Filly and Mare Sprint (G1) to be run Nov. 6 at Del Mar.

Trained by Neil Pessin and ridden by Corey Lanerie, Bell’s the One covered the 6 furlongs on the fast main track in 1:08.63, just .13 off the stakes record established by Indyanne in 2008.

Defending TCA champion Inthemidstofbiz hooked up in an early speed duel with Miss Mosaic, Estilo Talentoso and Frank’s Rockette through and opening quarter of :21.57 as Bell’s the One lagged at the back of the pack.

On the far turn, Lanerie began to close in on the field. Bell’s the One swung five wide at the head of the stretch, eased to the front at the eighth pole and had enough at the end to hold off a late bid from Club Car.

It was another 1½ lengths back to Inthemidstofbiz, who was followed in order by Frank’s Rockette and Miss Mosaic.

At the Nov. 10-19 Keeneland November Breeding Stock Sale, Brereton C. Jones/Airdrie Stud, agent, has consigned a weanling half-sister to Bell’s the One. The filly by Collected is Hip 31 and is scheduled to sell opening day. Click here for her catalog page.

Mrs. John Magnier, Michael Tabor, Derrick Smith and Westerberg’s Golden Pal made a successful return to the races at Keeneland by scoring a 2¼-length victory over Extravagant Kid in the 25th running of the $200,000 Woodford (G2) Presented by TVG for 3-year-olds and up.

Trained by Wesley Ward and ridden by John Velazquez, Golden Pal covered the 5½ furlongs on a turf course rated as good in 1:03.12. It is the second victory in the race for Ward, who saddled No Nay Never to the win in 2014.

Winner of the Breeders’ Cup Juvenile Turf Sprint (G2) here last fall in gate-to-wire fashion, Golden Pal flashed his speed out of the gate again Saturday carving out a :21.51 first quarter while on an uncontested lead.

He maintained a clear advantage to the head of the stretch when he was pressured on the outside by Firecrow and inside by Johnny Unleashed. At the three-sixteenths pole, Firecrow briefly stuck his head in front but the advantage was short-lived as Golden Pal quickly kicked clear to cruise to victory. 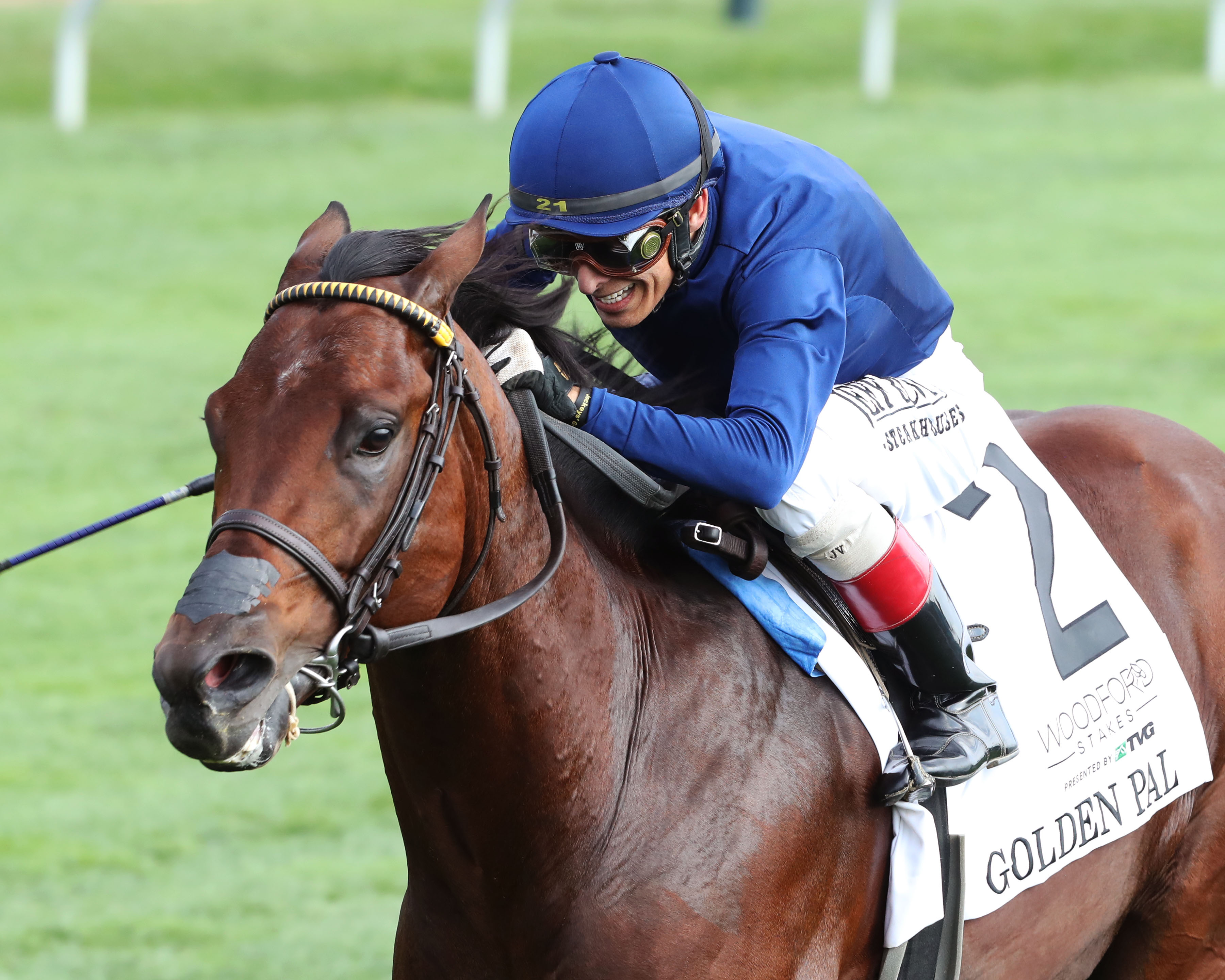 It was another head back to Johnny Unleashed in fourth with Inhalation (GB), Firecrow and Charcoal following in order.