The 3-year-old Hard Spun colt Belgrade, who opened his career in December with an impressive victory, was the final horse offered Wednesday during the second day of the Keeneland January Horses of All Ages Sale and topped the session when he sold for $700,000 to Carl and Yurie Pascarella. He will be trained by Graham Motion. 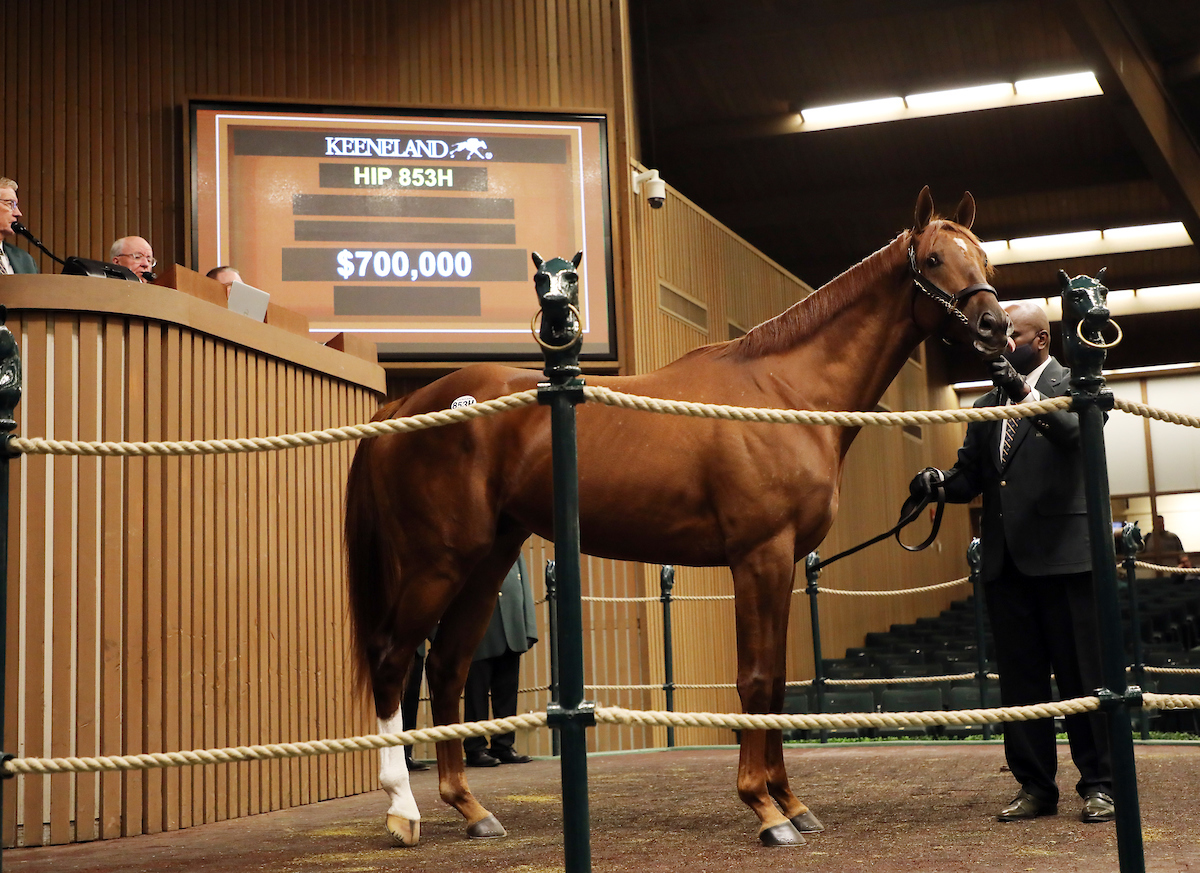 “Today was really good,” Keeneland Vice President of Sales Tony Lacy said. “Last year on this day we had the Paul Pompa and Sam-Son dispersals, so there were big shoes to fill. But we maintained the median at $40,000 and we came really close to last year’s gross. The quality horses were extremely popular. It was all very fair, and trade was strong and solid all the way through. A lot of smiling faces.”

Belgrade, who was consigned by Four Star Sales, agent, opened his career Dec. 18 at Fair Grounds with a 6-length maiden special weight victory. The colt, who is from the family of Grade 3 winners Medal Count and Garden District, was cataloged as a racing or stallion prospect.

“We have followed him. We liked how he won,” Buchanan said. “We tried to buy him privately after his race. We liked how he did it; he ran good numbers. (The Pascarellas) owned part of Animal Kingdom (trained by Motion to win the Kentucky Derby-G1) with Team Valor.

“It is terribly tricky to buy a horse like this,” she added. “We have been trying to buy privately all last year. (The price) was expensive, but that is what these horses (3-year-old colts with two-turn potential) are making right now.”

Belgrade and three other horses who were supplemented to the January Sale – Susie’s Baby at $600,000 and Her World (IRE) and Saucy Lady T at $425,000 apiece – were responsible for four of the session’s highest prices.

Cypress Creek paid $600,000 for Susie’s Baby, a stakes-producing daughter of Giant’s Causeway who is a half-sister to Irish highweight Caravaggio and is in foal to Constitution. In 2021, her daughter Family Way won the Kentucky Downs Ladies Marathon.

Susie’s Baby is out of the stakes-winning Holy Bull mare Mekko Hokte. She is also a half-sister to Grade 2 winner My Jen.
Co Cola, an 11-year-old daughter of Candy Ride (ARG) who is carrying a full sibling to 2021 Grade 1 winner Search Results, sold to Peter Blum. Search Results is a candidate to be named as a finalist for the 2021 Eclipse Award as champion 3-year-old filly when the horses eligible for Thoroughbred racing’s top honors are announced Saturday.

“Being in foal to Flatter (sire of Search Results) was a draw,” said Jonathan Harrison, who with his mother, Bridie Harrison, and other family members manage Blum’s broodmares. “She is an exciting addition to the group.

James B. Keogh (Grovendale), agent, consigned Co Cola, a winning, Grade 3-placed mare out of Yong Musician, by Yonaguska. She is from the family of Canadian champion Kimchi.

Narvick International paid $500,000 for Bella Vita, a 5-year-old stakes-winning daughter of Bayern who was second in the Dec. 4 Go for Wand (G3) at Aqueduct.

Consigned by Eaton Sales, agent, she is from the family of champion Vindication, and Grade 2 winner Hemsworth, and Grade 3 winners Strawberry Reason, Silver Comet, Scipion and Prime Attraction. Out of the Storm Cat mare Queenie Cat, she was cataloged as a racing or broodmare prospect.

“She is a very good racing filly and a beautiful type,” Narvick’s Emmanuel de Seroux said. “She has an excellent female line.”

While saying Bella Vita’s primary appeal is her broodmare potential, de Seroux said she is scheduled to return to racing.

Saucy Lady T, a 3-year-old daughter of Tonalist who was third in the 2021 Spinaway (G1), sold for $425,000 to Gary Broad/Walmac Farm. Consigned by Stuart Morris, agent, and cataloged as a racing or broodmare prospect, she is out of stakes winner Fila Prima, by War Front, and from the family of 2021 Cotillion (G1) and Rachel Alexandra (G2) winner Clairiere.

Andrew Farm went to $425,000 for Her World (IRE), a 3-year-old daughter of Caravaggio who won the 2021 Tyro Stakes. Consigned  by Paramount Sales, agent, she is out of Mundus Novus, by Unbridled’s Song and is a half-sister to English stakes winner Consort and from the family of Grade 1 winner Aruna, Grade 2 winners Surya and Hoop of Colour and Grade 3 winner Front Pocket Money.

Eaton Sales, agent, also consigned Siempre Mia, dam of 2021 Selima winner Consumer Spending and in foal to American Pharoah, who sold to St. George Stables for $390,000. The winning 9-year-old daughter of Scat Daddy is out of multiple Grade 3 winner Shaconage, by El Prado (IRE), and from the family of Grade/Group 3 winners Jadada and Jacare.

“I bought her for St. George Stables, who owns (probable 2021 champion older dirt female) Letruska,” Eduardo Terrazas said. “They keep their mares with me, and we have been able to secure three or four at the sale.

“She is a beautiful, strong mare,” he said about Siempre Mia. “In a way she kind of looks like a bully, which I love. I remember her yearling (Baba Voss, a colt by Empire Maker) last year (at the Keeneland September Sale.) You can’t go wrong with that.”

Wednesday’s top-priced yearling was a colt by Uncle Mo who sold for $310,000 to Sand Hill Bloodstock. Consigned by Stuart Morris, agent for Waldorf Farm, he is out of the Smart Strike mare Canadian River and from the family of Group 2 winner Montgomery’s Arch and Grade 3 winner Lotus Pool.

The January Sale resumes Thursday with the third of four sessions that run through Friday. All sessions begin at 10 a.m. ET.

The entire auction is livestreamed on Keeneland.com and shown on the Watch TVG App.