Demand for quality racehorses, led by the sale of a Curlin colt for $900,000, fueled another day of positive results as the Keeneland September Yearling Sale resumed Saturday following a one-day hiatus.

The partnership of BSW/Crow Colts Group/Spendthrift/Gandharvi went to $900,000 for the session-topping Curlin colt consigned by Elm Tree Farm (Mr. and Mrs. Jody Huckabay), agent for Stonestreet Bred & Raised. Out of the Malibu Moon mare Tangere, he is from the family of Grade 1 winners Tara’s Tango and Visionaire and recent New Kent County Virginia Derby (G3) winner Capensis. 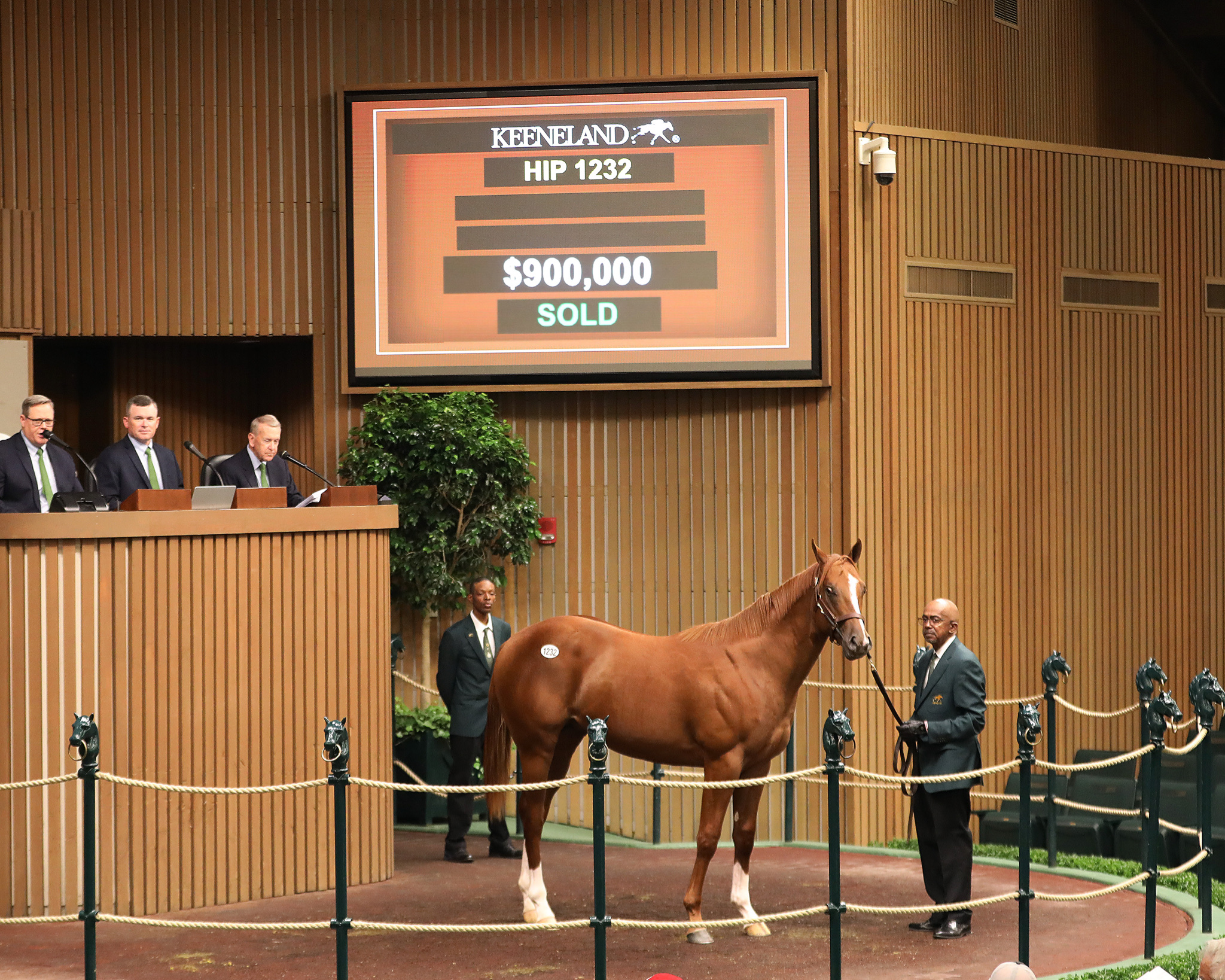 “It’s been tough to buy this sort of horse,” Brad Weisbord said. “With groups (such as) Mike Repole and Vinnie Viola (St. Elias Stables) and the SF group dominating the marketplace, we’ve tried to buy (less expensive horses), but Liz (Crow) and (Spendthrift Farm General Manager) Ned (Toffey) said keep going, so that’s what we did. We try to stay in the $500,000-$600,000 range, but we thought he was the top colt today so we stretched. The breeder (Stonestreet) stayed in for a piece – we think one of the top breeders in the game. For us, all the stars lined up.”

Ben McElroy, agent, spent $775,000 for a colt by Bolt d’Oro out of the Congrats mare Beautified. Consigned by Hill ‘n’ Dale Sales Agency, agent, he is from the family of Grade 3 winner Makeup Artist.

McElroy noted the success this year of the first crop of runners by Bolt d’Oro and being impressed by the colt’s Grade 1-placed half-sister, Dance to the Music.

"There is a huge emphasis on sire power, which it has been over the past two years,” McElroy said. “If you have the right sire, you are getting double if not triple, which you should.”

A colt from the first crop of Omaha Beach and the family of Grade 1 winner and producer My Flag sold for $725,000 to Michael Wallace, agent for St. Elias Stables. Clearsky Farms, agent, consigned the colt, who is from the family of champion Storm Flag Flying, Grade 1 winners Miner’s Mark and Traditionally and Grade 2 winners Jouster and Parading.

“We’ve been looking for an Omaha Beach, and this one got the attention of the whole team,” Wallace said. “The sale has been incredibly strong across the board. A lot of people still have plenty of money in their pockets. If you’d asked me three weeks ago if Book 3 would be this strong, I’d have said no. But after seeing Book 1, you knew people would be pushed back into the next days.”

Consigned by Woods Edge Farm (Peter O’Callaghan), agent, the son of Arrogate is out of the winning Ghostzapper mare Ghostslayer and is a half-brother to Grade 3 winner Biddy Duke. He also is from the family of champions Folklore and Essential Quality.

From the family of Horses of the Year and sires Saint Liam and Gun Runner, the Street Sense colt was consigned by Gainesway, agent for Bonne Chance Farm. His dam is the winning Medaglia d’Oro mare Glory and Power.

Lynnhaven also paid $675,000 for a colt from the first crop of Audible. Consigned by Lane’s End, agent, he is out of the winning Candy Ride (ARG) mare Ridingwiththedevil and from the family of Grade 3 winner My List.

A daughter of Arrogate from the family of champion Perfect Sting and Grade 3 winner Smart Sting sold to Rigney Racing for $600,000. She is out of the Lemon Drop Kid mare Peggy May and a half- sister to stakes winner Doc Boy. Greenfield Farms, agent for Sierra Farm, consigned the filly.

The leading consignor was Gainesway, who sold 26 horses for $7.31 million.