Larry Best’s OXO Equine paid $775,000 for a weanling filly by Curlin, a half-sister to Grade 3 winner The Tabulator consigned by Indian Creek, agent, to lead another active day of trade on Friday at Keeneland’s November Breeding Stock Sale. The filly’s price is the highest paid for a weanling sold this year at public auction in North America.

“The quality today reflected the same quality we had yesterday,” Keeneland Director of Sales Operations Geoffrey Russell said. “We had a good cross section of international and domestic buyers. The weanling market was very strong today, again spread between both end users and pinhookers. It was a good day, and we finished Book 2 very well.”

Frank Taylor of Taylor Made was on the phone with Best while the session-topping Curlin filly was in the sales ring.

“He already looked at her and had me bid,” Taylor said. “She’s a nice filly. He loved her and she had a great walk, everything we wanted. I was hoping (the price would be) a little less, but you never get those good ones like that.” 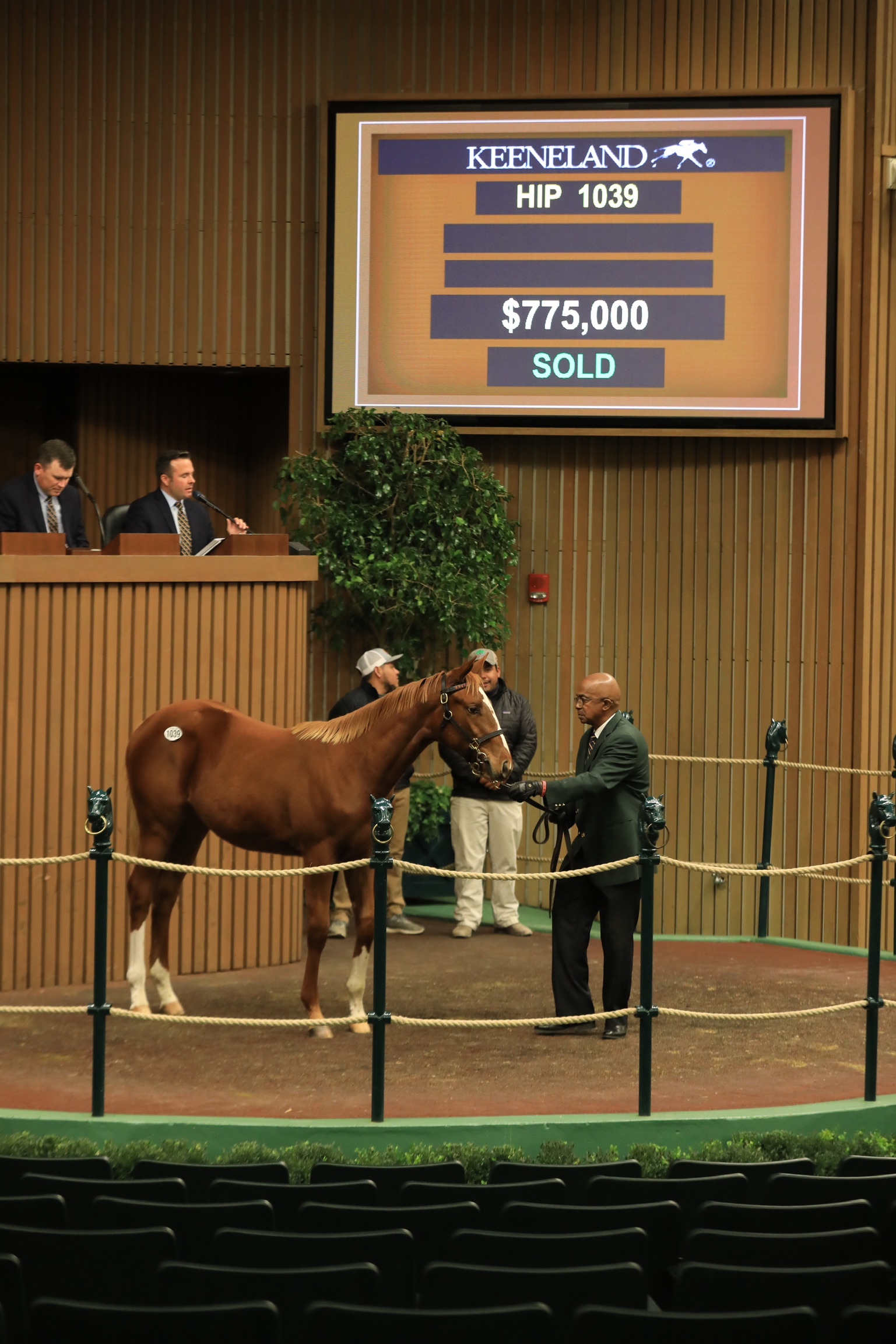 “This is big for Indian Creek and the team at home (to have a session topper),” Indian Creek President Shack Parrish said. “They are the ones that do all the work. I didn’t do anything but drive up here and get out of the car and carry a book around.”

Parrish was complimentary of the filly, whose dam is Fly to the Stars, by Giant’s Causeway.

“She has been straightforward, and here she has been an angel,” he said. “She showed in the rain yesterday, and it didn’t affect her. (The price) was a little more than we expected, but that was great. It was huge for our team.”

Two graded stakes-producing mares consigned by Warrendale Sales, agent for Live Oak Stud, were the highest-priced broodmares of the session. Arthur Hoyeau, agent, paid $585,000 for Slewfoundmoney, dam of multiple graded stakes winner and millionaire Awesome Slew, in foal to Into Mischief, and China Horse Club spent $550,000 on Daveron (GER), dam of 2019 graded stakes winners March to the Arch and Global Access, in foal to Uncle Mo.

“Live Oak breeds well. They have very nice broodmares that sell well, and we’re very pleased to offer them here,” Russell said. “I think the market respected them greatly.”

“They are both collectors’ items,” Warrendale owner Kitty Taylor said. “It is important for people to have the opportunity to get into these kind of families because (Live Oak owner Charlotte Weber) typically keeps and races everything. When she has young fillies out of the mares, she is willing to part with them.

“They were well sold, but we targeted that range,” she added. “We wanted to be in Book 2 because both are a little bit older and we wanted them to stand out. And they did.”

“She will stay in Kentucky, and she was bought for a new American client,” Hoyeau said about the mare. “She’s already in foal to a very hot sire (Into Mischief), and she’s been a very good producer; she ticks all the boxes. It’s a mix of what she produced and who she’s in foal to (that was attractive).”

Daveron is a 14-year-old Grade 2-winning daughter of Black Sam Bellamy out of the Acatenango mare Darwinia. This year, March to the Arch won the Wise Dan (G2) at Churchill Downs, and Global Access captured the Marine (G3) and Ontario Derby (G3) at Woodbine and Saranac (G3) at Saratoga.

“She’ll probably finish (our) buying this year,” Wallace said, referring to China Horse Club’s November Sale broodmare acquisitions of $3,715,000 for seven mares. “We’ll sit down and work out these last few matings for these American mares and tidy it all up. (Daveron is) off to a great start. She’s run herself, and she’s done the job already (as a graded stakes producer). She has a great cover so not much to not like.”

Consigned by Mill Ridge Sales, agent for Juddmonte Farms, Multilingual is a daughter of Group 1 winner Zenda (GB), by Zamindar. She is a half-sister to European highweight Kingman and a full sister to Group 3 winner Remote.

“She will go back to Europe,” Sangster said. “Her half-brothers are making waves in Europe. It is a lovely Juddmonte family, and she is a beautiful mare herself.”

“It is Juddmonte,” Headley Bell, managing partner of Mill Ridge Sales, said. “To get into that family is truly a gift. It is an opportunity for buyers, and we have to place them (during the sale) where they will stand out. Juddmonte is magic, and people love the chance to be part of Juddmonte.”

The sale of Friday’s second-highest-priced weanling occurred about 30 minutes after the start of the session when McMahon & Hill Bloodstock, agent, paid $425,000 for a filly by Arrogate who is a half-sister to 2015 Breeders’ Cup Filly and Mare Sprint (G1) winner Wavell Avenue.

“She will be a pinhook,” Mike McMahon said. “(My partner) Jamie Hill and I organize a pinhook every year with high-end fillies and colts, and she certainly fits the bill. We have been getting shut out, so it is nice to get a high-quality one early in the day. (The price) is exactly what we want. We like to buy the top end, and this filly will sell really well next year. She is a half-sister to a Breeders’ Cup winner, and that is what they are supposed to cost.

The November Sale covers 12 days through Sunday, Nov. 17, with all sessions beginning at 10 a.m. ET. Saturday is the first session of the two-day Book 3.