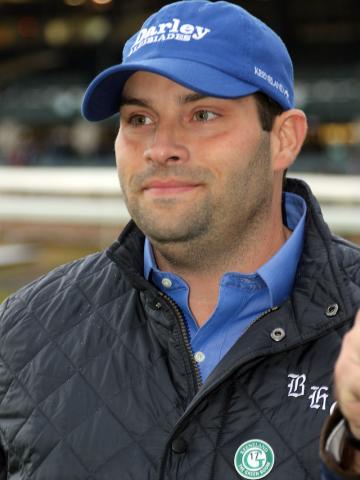 Starters in the Toyota Blue Grass

Sent out Essential Quality to win the 2021 Toyota Blue Grass (G2) during the Spring Meet when he also won the Coolmore Jenny Wiley (G1) with Juliet Foxtrot (GB) and the Baird Doubledogdare (G3) with Bonny South.

Co-leading trainer of the 2018 Spring Meet with 13 wins to equal Wesley Ward.

Won the 2019 Darley Alcibiades (G1) with British Idiom, who next won the Breeders' Cup Juvenile Fillies (G1) and was named champion 2-year-old filly.

Maintains a training operation for 2-year-olds at Keeneland following the Spring Meet. Monomoy Girl turned in the first three timed works of her career here in June 2017.

Earned his first Keeneland win during the 2005 Fall Meet.

Brad grew up in Louisville near Churchill Downs. He used to go to the track with his father and once told him: “I want to be the next D. Wayne Lukas,” Jennie Rees reported in the Louisville Courier-Journal. “I’d see a Racing Form someone threw in the trash, I’d take it home, reading it front to back – the articles, stats, horses, pedigrees, trying to figure out what could go long, go short, grass, dirt. I’d save them all. Never threw out a Form.”

Brad became involved in racing while working for trainers Burt Kessinger and Jimmy Baker before landing a job as assistant to trainer Dallas Stewart. His five-year stint there introduced him to the successful training program of Racing Hall of Famer D. Wayne Lukas that has been passed down through former assistants such as Todd Pletcher, Kiaran McLaughlin and Stewart.

After scoring his first win in December 2004 (with his second starter), Brad launched his training career in 2005 at the age of 25. His barn enjoyed a breakout year in 2014, accumulating 75 wins in 295 starts and earning $2,394,571. He recorded first graded stakes win that year with Carve in the Prairie Meadows Cornhusker (G3).